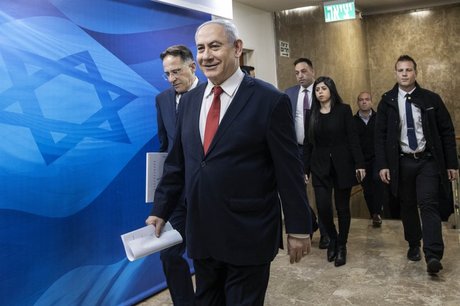 Israeli lawmakers on Monday voted in favour of discussing Prime Minister Benjamin Netanyahu's immunity request, bringing the premier's legal woes to the fore weeks ahead of an election.

Netanyahu lodged his immunity request with parliament earlier this month in a move critics said was aimed at delaying court proceedings until after the March 2 polls.

But after days of wrangling over parliamentary procedure, a committee of lawmakers met Monday and voted 16 to 1 in favour of taking the next step to discuss the premier's request.

They did not set a date to convene the separate House Committee that will deal directly with Netanyahu's immunity bid.

Edelstein asked parliamentary legal advisor Eyal Yinon whether he had the authority to stop the committees being formed, but Yinon concluded Sunday the speaker could not stand in the way.

Netanyahu's top rival, Benny Gantz, subsequently urged lawmakers from his Blue and White alliance to start the immunity debate "as soon as possible".

Parties representing 65 lawmakers in favour of denying Netanyahu immunity -- a majority of the 120 Knesset members -- had earlier requested the process be launched.

The prime minister was charged by the attorney general in November with bribery, fraud and breach of trust in three corruption cases.

The Likud leader denies the allegations and accuses prosecutors and the media of a witch hunt.

Under Israeli law, a sitting prime minister is only required to step down once convicted of an offence and after all avenues of appeal have been exhausted.

Likud and Blue and White were deadlocked in April and September elections, prompting a third national poll within a year.