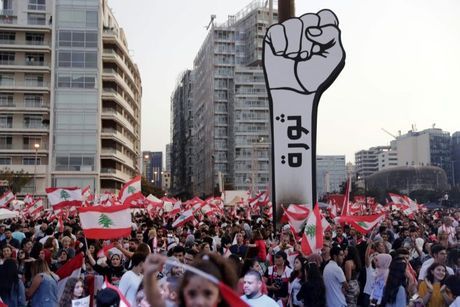 Lebanese activists express resentment at what they say is “fading media coverage” of their movements in the past few weeks, after the outbreak of mass protests on October 17 where TV live coverage largely helped its success and continuity, Asharq al-Awsat daily reported on Tuesday.

The daily said some link it to a decline in the momentum of protests as a result of weather conditions and holidays. Others see that the political elite has come to reimpose their presence on TV networks by “pumping” the funds needed to the financially-stricken stations.

“With the beginning of the year 2020, TV stations returned to host the same faces that ruled the country and led it to bankruptcy in an attempt to clear their image,” said activist Lucien Abou Rjeily to the daily. “That brings to mind what happened during the parliamentary elections when politicians monopolized the screens with their money to make false promises.”

On his part, editor-in-chief of MTV news program, Walid Abboud assured that “the station is still keeping pace with events whose momentum has receded for various reasons, including weather and holidays. We are not in a position to fabricate an event, but rather cover incidents when they happen.”

He said live coverage during the first two months of the uprising has largely contributed in encouraging people to join the protests.

“During the first two months, live broadcast was open for 18 hours per day,” he said, noting that protests will resume their momentum and TV coverage will return despite salary deductions due to the great economic and financial crisis inflicting Lebanon’s institutions.

During the past three months, the majority of local media outlets, mainly visual, laid off employees and introduced salary cuts due to a massive decline in the advertising market.

“Media coverage of the popular movements retreated due to the decline in momentum and the media's pursuit of material resources in the absence of advertisements,” activist Walid al-Alami told Asharq al-Awsat.

“When the revolution was the focal attention, TV stations were forced to cover it to attract viewers. It is more likely that coverage will return with the return of momentum,” he added.

The TV stations belong to the corrupt ruling class, what did they expect?
However, online and paper press are covering the events though some are also controlled by the ruling class.