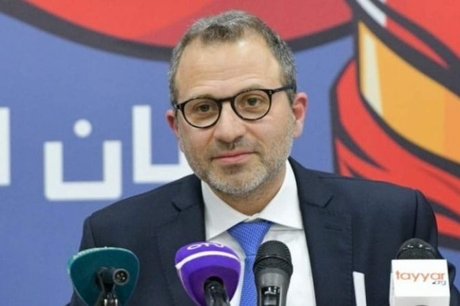 Free Patriotic Movement chief Jebran Bassil on Tuesday called for the formation of a new government that would gain “the confidence of people, parliament and the international community,” stressing that the FPM is not seeking ministerial seats or a one-third veto power in Cabinet.

“We were supposed to declare an advanced stance today but today's developments have pushed us to further shoulder our responsibility,” Bassil said after the weekly meeting of the Strong Lebanon bloc, referring to the renewal of massive street protests across the country.

“We do not have the luxury of time and the PM-designate must perform his duties,” Bassil urged.

“There are rumors about the new government and we have not changed our stance,” Bassil added. “From the very beginning, we have said that we do not have partisan requests regarding the new government,” he said.

He also lamented that caretaker PM Saad Hariri and some caretaker ministers are “not performing their duties.”

Bassil had met earlier in the day with Parliament Speaker Nabih Berri.

Al-Manar TV said the meeting “has launched a new positive course in the government formation process.”

Al-Manar TV said the meeting “has launched a new positive course in the government formation process.”

Well if Al-Manar said it, then it must be true. Too bad the rest of the world sees it differently. French told Diab not to listen to Basil and now suddenly he tries to makes himself look good.

"and the PM-designate must perform his duties,”

What about you performing your duties and get us the 24/7 electricity you promised back in 2013?!

Is this guy still talking??
seriously... what an absolute low life..

to think he remains in his portfolio as a person who has never ever won any type of election under the guise of the President remains a big reason that Lebanon is a failed state with the current people in the seats.. tfe tfe

He denies every promise he has made too lol.

When I see his ugly face and hear his lies, adding up upon lies, I can't but remember one thing: Hela, Hela, Hela Hela Ho...