Protesters Clash with Police outside ISF Barracks in Mar Elias 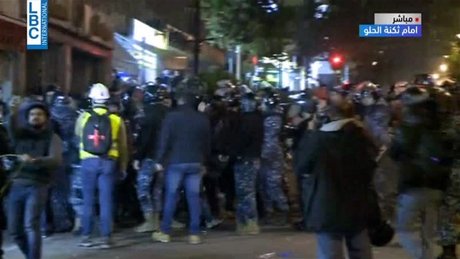 Clashes erupted Wednesday evening between security forces and protesters demanding the release of dozens of people who were arrested Tuesday during a demo that turned violent in Beirut's Hamra area.

Security forces fired tear gas to disperse protesters after some of them hurled firecrackers and empty bottles.

The demonstrators later responded with stones after tear gas was fired at them and after several protesters were arrested or beaten up by riot police.

TV networks reported that several protesters were injured in the violence.

The National News Agency meanwhile said that some tear gas canisters landed inside the premises of the nearby Russian embassy.

Large numbers of protesters had gathered outside the barracks since morning to demand the release of those arrested overnight.

Al-Jadeed TV meanwhile said that some protesters smashed the facades and ATMs of some banks while on their way to the demo outside the barracks.