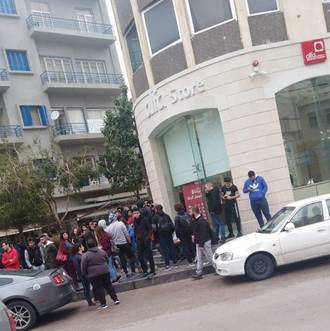 A day after demonstrations outraged by restrictions on dollar withdrawal turned their anger on banks in the past two days, school students on Thursday protested near state-owned telecoms companies Touch and Alfa as protests against a government deadlock and banks continue to spiral across the country.

Amid reports that the much-delayed formation of Lebanon’s government is “imminent,” a group of students protested inside the offices of Alfa in the Jbeil area locking its doors and preventing access for customers.

On Wednesday, they blocked the vital Jounieh highway in both directions before being swiftly confronted by army troops.The soldiers managed to reopen the highway after arrests and scuffles with the demonstrators.

In the southern city of Sidon, the Lebanese army removed blockages placed a day earlier at the key Elia intersection opening way for congested traffic. Meanwhile the city’s main square remains blocked by demonstrators since the uprising began on October 17.

In Beirut’s neighborhood of Corniche al-Mazraa, where protesters turned their anger at the banks smashing their windows, banks opened despite the wreckage and as cleaners scrubbed paint off walls and workers replaced smashed windows.

Protesters in crisis-hit Lebanon are outraged by restrictions on dollar withdrawals and a failure to form a government, as the country enters its fourth month of mass protests against the political elite and banks.

Protesters have mainly attacked bank branches with metal rods, fire extinguishers and rocks in the past two days.

Lebanon is grappling with a political and economic crisis that have seen banks trap the savings of ordinary depositors in Lebanon's worst economic crisis since the 1975-1990 civil war.

On Wednesday, reports said that the last obstacle impeding the formation of the new government was resolved and that it will be announced Friday.

How can this government still lay claim to be able to resolve anything?