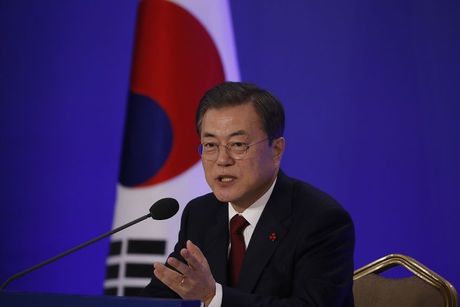 Washington has compromised in its demands that South Korea should pay billions of dollars towards US troop presence and it was Seoul's turn to reciprocate before time ran out, the American ambassador said Thursday.

The two allies are in a security alliance and Washington stations 28,500 troops in South Korea to defend it from the nuclear-armed North, which invaded in 1950.

They are a key part of US forces' deployment in Asia, but the Trump administration has been insisting Seoul pay more towards their costs.

The initial US demand was around $5 billion a year -- a more than fivefold increase on the roughly $900 million paid in 2019 -- provoking consternation in Seoul.

The latest round of negotiations concluded without an agreement in Washington on Wednesday.

US negotiators had "adjusted our position, our top line number", said Ambassador Harry Harris. "We are now waiting for the Korean side to do the same."

"South Korea as an equal partner in the preservation of peace on the peninsula, and its position as the 12th largest economy in the entire world, can and should do more."

Time was "of the essence", he told reporters in a group interview at his residence in the centre of Seoul.

Around 10,000 South Koreans working for United States Forces Korea (USFK) are paid from funds from last year's deal and when they run out, they will have to be put on furlough, he said. "That notice is going to go out soon."

Other US allies would face similar demands from Washington in the future, added Harris, a former Navy admiral and commander of US Pacific Command.

"Korea just happens to be the first country whose SMA expires," he said. "Japan is next. And then we go around from there."

Nuclear negotiations between Washington and Pyongyang have been at a standstill since the Hanoi summit between Trump and leader Kim Jong Un collapsed in February, despite a high-profile meeting between them in the Demilitarized Zone that divides the Korean peninsula.

Pyongyang is demanding sanctions relief while Washington wants it to first take concrete steps towards denuclearisation, and at the end of December, Kim announced that he was no longer bound by his moratorium on nuclear and long-range missile tests.

"Trump has left the door open for negotiations despite a year of testing short-range missiles all of which violate UN security resolutions, and is still open to negotiations," Harris said, adding the ball was in Kim's court.

"President Trump believes in the commitment that Kim Jong Un made to denuclearise," he said, referring to the vaguely worded declaration from their first summit in Singapore, which mentioned denuclearisation of the "Korean peninsula" rather than the North specifically.

"The last time I checked there were no nuclear weapons in South Korea," Harris noted.

The US President would not be distracted from North Korea issue by the American election or his own impeachment process, the ambassador added.

"I think that President Trump, like the United States, can walk and chew gum at the same time."

Pyongyang has repeatedly excoriated Seoul in recent months but South Korean President Moon Jae-in has repeatedly pushed engagement, including the possibility of Southern tourists visiting their neighbour -- prompting accusations that his approach was unrealistic.

But he warned that cross-border initiatives "should be done in consultation with the United States".

It was not Washington's role to "approve or disapprove", he said, "but we are Korea's only ally, we do have 28,500 American troops here, American taxpayers pay billions of dollars to defend this country, so we have an interest in inter-Korean dialogue."

Perhaps a deal might be reached if the US offered 5 billion dollars to let the troops stay there. There would have to be security guarantees, such as a "no-nuclear" clause.