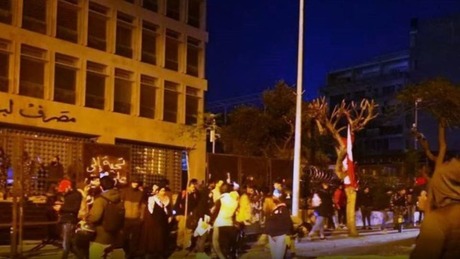 The skirmishes started after some protesters hurled bottles, stones and firecrackers at security forces outside the central bank, which prompted riot police to chase them to the end of Hamra Street.

Some protesters had earlier hurled “Molotov cocktails and rocks” into the premises of the central bank as others removed the barbed wire.

Al-Jadeed TV reporter Adam Chamseddine was injured by a flying stone which struck his head as he was covering the demo.

Calm later returned to the street as protesters gathered anew and chanted slogans outside the central bank.