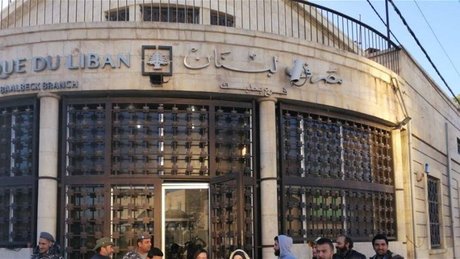 Protesters hurled eggs and vandalized banks while others blocked several main roads on Saturday as unprecedented demonstrations against a political elite accused of corruption and incompetence entered their fourth month.

In the city of Baalbek, demonstrators hurled eggs at the central bank’s branch in the area and prevented access for employees.

Others sprayed graffiti and vandalised banks in Beirut’s southern suburb of Dahieh, a move unseen before in Hizbullah’s stronghold.

“Down with the dollar, down with the rule of the banks,” graffiti sprayed on banks walls read.

Panic and anger have gripped the public as they watch their local currency, pegged to the dollar for almost three decades, plummet, losing more than 60% of its value in recent weeks on the black market. Meanwhile, banks have imposed informal capital controls, limiting withdrawal of dollars and foreign transfers from the country.

We finally know who destroys the banks! The mitwelians.... but they aren’t getting arrested by the cops. Cops only arrest Christians, Sunnis, Druze and Journalists.

A couple of years back, they left a bomb in front of BLOM Bank in Beirut... it was already them.