Lebanon Protesters to Rally Anew after Almost 400 Hurt in Clashes 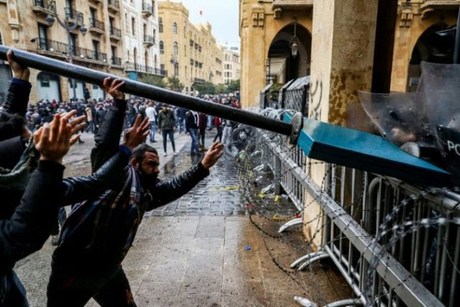 Almost 400 people were wounded during running battles between Lebanese anti-government protesters and security forces in Beirut Saturday, rescuers said, the heaviest toll since the demonstrations erupted three months ago.

More street rallies were expected Sunday as part of popular protests since October 17 that have demanded the wholesale ouster of the Lebanese political class, which activists condemn as inept and corrupt.

Sunday morning, the streets were mostly empty as rain fell on the center of Beirut, with police cars guarding the entrances to the main protest hub at Martyrs' Square.

On a side street leading towards the seat of government, a tea pot lay among black cinders on the pavement where unknown perpetrators set fire to protest tents the night before.

Ali, a 34-year-old who had camped in one of the tents, said he had lost his belongings in the blaze and was left with "just the clothes I'm wearing and the papers I had in my pocket."

But "the attack made us stronger. We will continue with even more energy to speak out the truth," he said, as he huddled around a wood fire next to the wreckage wrapped in a thick blanket.

On Saturday, at least 377 people were injured -- both protesters and members of the security forces -- according to a toll compiled by AFP from figures provided by the Red Cross and Civil Defense.

On Sunday, social media users and a local television channel shared the testimonies of relatives of at least two young men they said were hit in the eyes by rubber bullets.

Saturday's clashes began after dozens of protesters, some concealing their faces with scarves, threw rocks and plant pots at anti-riot police guarding the road leading to parliament in Beirut.

The security forces responded with water cannon and tear gas to disperse the crowds.

Protesters had called for a week of "anger" as an economic crisis deepened while efforts remained deadlocked to form a new government to replace a leadership that stepped down under street pressure last year.

The Civil Defense said 43 people were taken to hospital, and 114 others treated at the scene over slight injuries or "breathing problems."

The Red Cross said it had rushed 80 people to hospitals while 140 were given first aid on site.

Security forces said they had opened an investigation after a video shared online showed police beating up people believed to be protesters as they were brought to a Beirut police station.

"Another day without a government, another night of violence and clashes," U.N. envoy to Lebanon Jan Kubis said on Twitter, summing up the country's situation since October.

Political factions agreed on December 19 to appoint former education minister Hassan Diab as the new premier but have since squabbled over proposed ministers.

The protesters have demanded that a new government be comprised solely of independent experts, and exclude all established political parties they accuse of being motivated by personal and partisan gains.

The World Bank has warned the poverty rate in Lebanon could rise from a third to half of the population if the political crisis is not resolved soon.

So if there are international intelligence organisations behind all this in a bid to change the Lebanese system , and if Lebanese intelligence is so good, why haven't they identified the operatives and who's behind this all...

correct! it is in the genes of lebanese politicians to throw the blame on others, they never ever take any resposibility for their actions because they are all irreponsible people...

please lets all post pictures of our great army, police and poltical leaders who are constant in one thing failure. Our strong army that wins every battle against its people yet looses every one against others who have invaded us over the last 50 years....