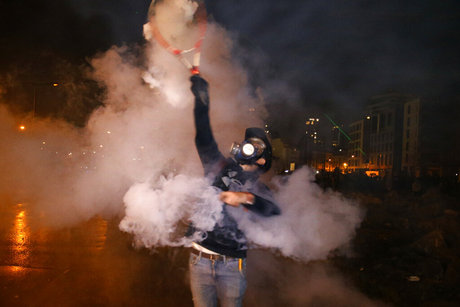 Lebanon has been paralyzed by three months of protests demanding an overhaul of the entire political system.

Here is a recap of the unrest, after almost 400 people are wounded in clashes over the weekend, the highest such tally since the start of the anti-establishment demonstrations:

On October 17, the government announces a tax on messaging applications, including WhatsApp, which is popular because of high telephony charges.

Coming amid a looming economic crisis, many see the plan as a step too far.

Thousands take to the streets in Beirut and other cities, some chanting "the people demand the fall of the regime".

The government scraps the tax on messaging applications the same day, but protests continue.

On October 18, thousands of demonstrators representing different sects and political affiliations bring the capital to a standstill.

They demand an overhaul of the political system, citing grievances from austerity measures and state corruption to poor infrastructure and regular electricity cuts.

Demonstrations swell over the following days and dozens are arrested.

On October 21, Prime Minister Saad Hariri announces his government has approved a raft of economic reforms, including halving salaries for lawmakers and ministers.

But demonstrators dismiss the new measures as insufficient.

On October 25, Hizbullah -- which with its allies holds a majority in parliament -- tells supporters not to take part in protests.

On the evening of October 29, Hariri submits his resignation and that of his government, prompting celebrations in the streets.

President Michel Aoun asks the government to stay on until a new cabinet is formed.

In a television address on November 3, Aoun announces plans to tackle corruption, reform the economy and form a new government including technical experts.

On December 11 at a Paris conference, France, the United States, Russia and other countries rebuff Lebanon's urgent aid appeal, making assistance conditional on the formation of a new reform-minded government.

Hariri also asks the International Monetary Fund and the World Bank for support in drawing up a rescue plan.

On December 14 and 15 dozens of people are wounded and security forces use tear gas and rubber bullets to disperse demonstrators.

Dozens more are wounded on December 17, in dawn clashes between security forces and supporters of Hizbullah and AMAL.

On December 19, the president finally names a new prime minister: little-known academic Hassan Diab, who is backed by Hizbullah.

Protesters immediately regroup to condemn the appointment, which outrages members of the Sunni community. Protests continue the following day with roads blocked across the country.

On January 11, 2020, protests resume after a pause over the holidays. Days later clashes take place in Beirut and several banks are vandalized.

On January 17 violence breaks out after dozens of protesters throw rocks and large plant pots at police guarding a road leading to parliament while others charge police lines.

And the next day, in what is the heaviest toll since the protests began, at least 377 people -- both demonstrators and members of the security forces -- are rushed to hospital or treated at the scene.