Diab Meets with Aoun amid Reports of Imminent Govt. Formation 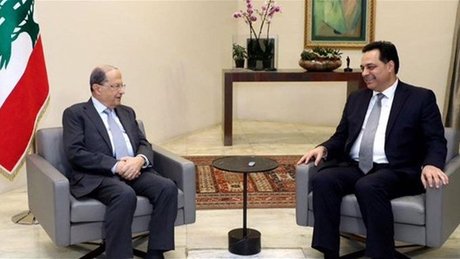 Diab left without making a statement after the 90-minute meeting, after media reports said that the cabinet line-up could be announced on Sunday.

TV networks said the meeting was "positive" although some points remain unresolved.

March 8 sources told MTV that the line-up was not yet "ready."

TV networks meanwhile announced that the Marada Movement will not take part in the government and that its chief Suleiman Franjieh will hold a press conference on Tuesday.

LBCI television had earlier said that “the efforts of the Shiite duo and the other forces are witnessing a new momentum regarding the government’s size and the number and portfolios of the ministers.”

“The Shiite duo will seek to convince PM-designate Hassan Diab to enlarge the government to 20 ministers to resolve the obstacle related to the representation of Marada and the Syrian Social Nationalist Party,” LBCI said.

“The Shiite duo is keen on the representation of all its allies in the government,” it added.

Media is constantly disclosing the farse that's being performed by Politicians. News like that is a Clear sabotage, It's like saying over and over "Hey People the independent Technocrats are representatives of the same Political parties that you rejected!"

The Independent ones aren't Independent. Who would have guessed that Politicians would do that? Lol... Predictable!