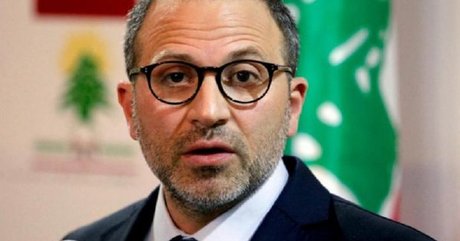 The planned participation of caretaker Foreign Minister Jebran Bassil at this week's World Economic Forum has sparked a public outcry in protest-hit Lebanon, prompting calls to overturn his invitation.

Bassil has consistently come under fire from demonstrators mobilized since October 17 to demand the removal of a political class they deem incompetent and corrupt.

Demonstrators view him as a symbol of the sectarian, hereditary politics that stunted an economy now facing its worst crisis since the 1975-1990 civil war.

His scheduled appearance this week in the Swiss resort of Davos, where he will represent Lebanon, has sparked several online petitions urging the World Economic Forum to revoke his invitation to talk on unrest in the Arab World.

"He should not be present at a prestigious international forum such as Davos in our name," read one online petition that garnered more than 6,000 signatures.

"He should not be given a legitimate platform... to speak on behalf of a nation that has rejected him and accuses him of flagrant corruption."

A second petition making the same appeal garnered more than 12,000 signatures in a matter of hours.

"Jebran Bassil has been at the center of all major disastrous decisions that led the country to a political crisis," it read.

"The Lebanese people cannot and will not accept a failed, corrupt and especially an ousted minister to still represent their voice on the world stage."

Bassil's planned participation in Davos has also sparked condemnation on social media networks, with some calling on Lebanese expatriates in Switzerland to mobilize.

"Go to Davos, follow him everywhere with flags and signposts saying -- Bassil doesn't represent us," one user said on Twitter.

Lebanon's economic downturn coincides with a political deadlock that has left the country without a fully functioning government since Saad Hariri bowed to popular pressure on October 29 and quit the premiership.

The man designated to succeed him, Hassan Diab, has so far failed to form a government of independent experts -- a key demand of protesters.

Angered by the delay, protests have turned violent in recent days.

Scuffles with security forces at the weekend wounded more than 540 people on the two sides, according to a toll compiled by AFP from figures provided by the Red Cross and Civil Defense.

Execute him and painfully.

Your like Hizballah, Amal, Zionest, AND ISIS tric.portugal
your an extremest a hypocrite.... you are a Successful product of the brainwasher machine.

WOW were the hell is he going to be getting the money for this trip???
Damn!!!!

Were is this Online Petition?

You are far far far away from being a good Christian
You are the Equivalent of (KSA DAASH) a Purely Extremist person that knows nothing of all the good faiths...
People like you have Hijacked Christianly like ISIS has done to Islam... neither representing an atoms weight of the faiths!!!
WE ARE PEACE... people like you are nothing but WAR!!!

He is an impostor and a Shia; paid to post.

Since Extremist are truly a Minority amongst the earth's population .... hope one day spaceX offers you a oneway ticket to MARS with all the other extremest!
Peace ON EARTH...

His place is six feet under, just next to his father in law; may the black pest be back sometime soon and take them all to Hades' dungeons!

Now FPM is calling the campaign a 'zionist' conspiracy. Next they will apply for Basil's saintdom while he is alive.