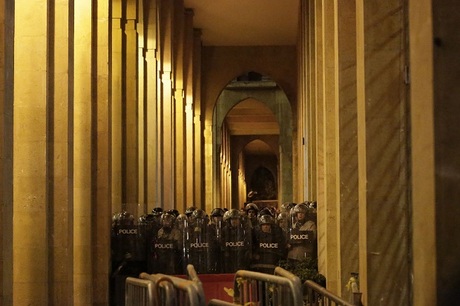 A U.S. report on the situation in crisis-hit Lebanon reportedly describes the situation as “discouraging” and blames the political authority for economic deterioration after “ignoring” for years all advice delivered by the World Bank, al-Joumhouria daily reported on Tuesday.

A senior Lebanese official who spoke on condition of anonymity about Washington's report told the daily that “the economic and financial situation in Lebanon is close to becoming an incurable and hopeless disease.”

He said Lebanon has a very long path to recovering its economic vitality, and the situation will worsen with time, unless it urgently acts to avoid the threat it is facing. The international financial institutions are still urging the Lebanese to implement a program of qualitative and urgent reforms.

Moreover, Lebanese figures from Washington quoted American officials as saying that “the US administration is closely watching Lebanon developments emphasizing the need that Lebanese authorities take an initiative to guarantee the safety of demonstrators.”

US officials reportedly avoid expressing a direct position with Prime Minister-designate Hassan Diab, but they “will judge the Lebanese government when it is formed and begins work,” they said.

Previously, the American administration has conveyed to officials in Lebanon its call to form a government that meets the people’s demands, and is committed to advancing reforms and fighting corruption, according to the sources.

They said any direct and immediate American aid to Lebanon is “closely related to what the new government will do because a credible government that is capable of real reforms will restore the confidence of Lebanese and investors and reopens the door to international aid.

“There is an international understanding on this issue,” they concluded.

Signed Sealed and Delivered.
Thanks Barry

Please, sign this petition regarding Bassil's trip to Davos and spread the word:
Gebran Bassil NO LONGER represents the Lebanese people, in international forums
https://www.change.org/p/world-economic-forum-annual-meeting-2020-gebran-bassil-no-longer-represents-the-lebanese-people-in-international-forums

In the cadre of the Ossian el Madani I have decided not to settle the taxes on my establishment for the coming year, even if it's just peanuts, it remains a question of principal!

I urge all those who have small and middle enterprises to avoid paying VAT and the annual tax for the last quarter and for 2019.

I decided not to pay my taxes either until I can withdraw as much money as I want from my bank account.

So no municipality, water, electricity bills to be honored until my rights are returned.

barrymore 1 min ago 01
Please, sign this petition regarding Bassil's trip to Davos and spread the word:
Gebran Bassil NO LONGER represents the Lebanese people, in international forums
https://www.change.org/p/world-economic-forum-annual-meeting-2020-gebran-bassil-no-longer-represents-the-lebanese-people-in-international-forums

The report was written by Chelsea Clinton's daughter.