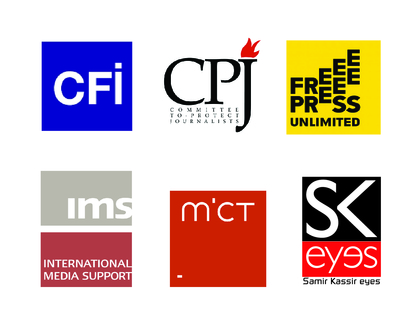 “The violence reached its peak in front of a police barracks in the Mar Elias neighborhood on the night of January 15, 2020, when security officers and the riot police used excessive force to disperse protesters. Several journalists and photographers who were covering the stand-off were beaten, had their media equipment broken, and some were detained,” the groups said in a statement distributed by the SKeyes Center for Media and Cultural Freedom.

SKeyes identified more than 20 violations against media professionals since January 14, which raises the total number of violations to 75 since the beginning of the popular uprising on October 17, 2019.

The signatory press freedom and media development organizations “strongly condemn these blatant attacks on freedom of information and violations of basic journalists’ rights. The organizations are gravely concerned that most of these violations were perpetrated by security forces whose primary duty is to protect citizens and provide journalists with the safest possible environment to fulfill their mission,” the groups added.

Following the clashes, caretaker Interior Minister Raya al-Hassan spoke to the press and denied having issued orders to security forces to use force against peaceful protesters and journalists, saying she did not know who gave the instructions.

“This denial reinforces our concern related to the absence of accountability in a country where impunity for perpetrators of all types of crimes against journalists has been the norm, including when journalists were assassinated,” the press groups said in their statement.

The signatory organizations also called on Lebanese authorities to conduct a swift and transparent investigation into “the parties that were responsible for the violent repression against journalists, followed by fair and independent judiciary action against perpetrators.”

they even arrested and harassed a freelance American journalist accusing him of working for the Israeli paper Haaretz, which is obviously a lie.

Nicholas Frakes is being processed by the military court and it is unlikely that he will be provided with legal representation, according to The New Arab.

Where is the military court when people like mr Michel Aoun are filmed shaking hands with Ariel Sharon in occupied Beirut ?