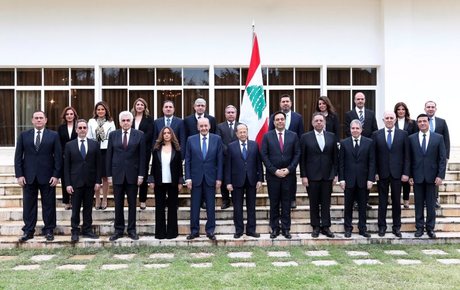 The newly formed government in crisis-hit Lebanon held its first meeting on Wednesday at Baabda Palace and was chaired by President Michel Aoun.

The government meeting was held directly after having the official commemorative photo taken.

A meeting between Aoun, new Prime Minister Hassan Diab and Speaker Nabih Berri was held before the government convened.

When asked about his opinion of the new government, smiling Berri who seldom makes comments to reporters, said: “The media are pessimistic, but we are optimistic.”

The cabinet was formed Tuesday breaking a months-long impasse amid mass protests against the country's ruling elite and a crippling financial crisis, but demonstrations and violence continued overnight and early today.

Diab, a 60-year-old former professor at the American University of Beirut, announced a Cabinet of 20 members — mostly specialists supported by Hizbullah and allied political parties.

The new government, which comes three months after former Prime Minister Saad Hariri resigned, was rejected by protesters who have been calling for sweeping reforms and a government made up of independent technocrats that can deal with the country's economic and financial crisis, the worst since the 1975-90 civil war.

corrupt evil sectarian along with his ailing father-in-law.

and we are paying for this filth and his entourage.

The country is broke but somehow the corrupt minister manages to find none in the state coffers to finance private jets for him and his dirty buddies... let’s not forget about Presidential suites in palaces which cost between 50.000 and 400.000 per night.

* the corrupt ministers manages to find money in the state coffers

Never has Lebanon known or seen a government as technocrat or as independent as this one, ever!

I had to laugh at her statement:) So, she admits she became a minister as a result of family ties with Aoun but then again she is not FPM:)!

If she's related to Aoun she should be وزيرة المهاجرين. This is Michel Aoun's only success story.

Taking wagers, Demianos Khattar will be the first to tend his resignation if the Tayyar's appointees act in the same manner as their predecessors in the previous two government. ie Gebran Bassil hands down the directives on how they run their ministries and they comply. And I bet it's what the Tayyar wants. Push the independent Maronite minister to resign so they can appoint an extra one of their own.

Still shaking my head, that with a country on edge on bankruptcy if not already bankrupt, they come with 20 ministries to waster more public funds. No other country has a Ministry of Displaced. They even talking of elimination it it alone with Information Ministry yet they persist. Next thing you know create a new Ministry of Corrupt officials. Wonder who would be made minister of that.

This government is a slap in the face of the people protesting and starving. What a freaking Joke...

but the prime minister already already warned us that a catastrophe is ahead, the finance minister that the lira is doomed... just to protect themselves knowing they won't be able to do a thing?