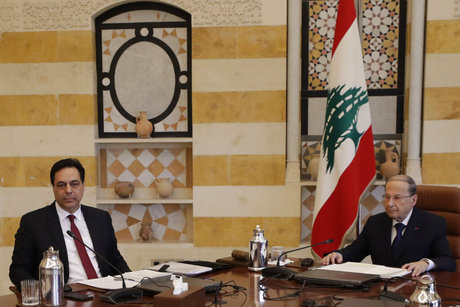 President Michel Aoun on Wednesday said the new government must seek to regain international confidence in Lebanon and reassure the anxious citizens.

“The critical period requires doubling the efforts and work, especially that the government was formed amid very difficult economic, financial and social situations,” Aoun told ministers during the first session of Hassan Diab’s government which was formed overnight.

“It is necessary to work on addressing the economic situations, regaining the confidence of the international community in Lebanese institutions and reassuring the Lebanese about their future,” the president added.

Noting that the government will hold successive sessions, Aoun said the previous government had prepared an economic plan and financial reforms which should be “implemented, or amended if necessary,” by the new government.

Regain international confidence with you around? dream on

I think the answer is not a chance to both. Maybe the minions will see 'confidence', and maybe Syria and Iran will approve, but the rest of the world sees what has been done.

No money, no aid, no confidence---hopefully no aoun.

i thought the west are demons and imperialists, isn't that the position of march 8th? oh! wait when it suits them only.....