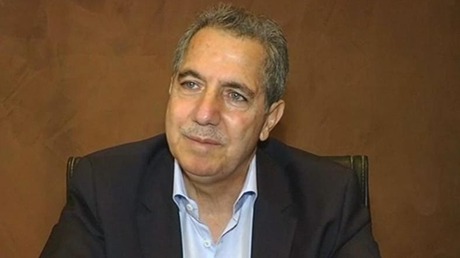 Lebanon’s new finance minister Ghazi Wazni on Wednesday said that it will be “difficult, if not impossible,” to return the dollar exchange rate to its previous state on the parallel market.

“The dollar exchange rate dropped to LBP 2,000 because a new government represents a confidence factor, but it will be difficult, if not impossible, to return to the official exchange rate” set by the central bank, Wazni, who is a well-known financial expert, said in remarks to al-Jadeed TV.

He however noted that the central bank can “alleviate the impact of the discrepancy in the exchange rate” should the government “offer a salvation Policy Statement that would be convincing inside and outside the country, which would allow it to draw foreign support.”

“Controlling the parallel market in the coming period is linked to the government’s work,” Wazni said in remarks to LBCI TV.

“The situation is very difficult but halting the collapse we are going through is possible. The issue requires support from inside and outside the country and this is everyone’s responsibility,” the new minister added.

It didn’t drop to 2000LL per dollar, this is what has been imposed to the exchange bureaus... it doesn’t mean it’s the real conversion rate accross Lebanon.

I can already tell he’s incompetent from his first statement!

"The dollar exchange rate dropped to LBP 2,000 because a new government represents a confidence factor"
Sorry Mr Wazni but the exchange rate was capped yesterday at $2000 before the government was announced. Even before it was announced that it was going to be formed that day. It's a disappointing that his first statement as a minister is a lie.

2000LL is the buying price! not the selling price which is not capped ....

One of the biggest contribution factor to the drop of the LL is those un regulated Exchange Bureaus or their henchmen who work on street corners. They are speculators and drive the currency up or down. They should be banned.

Only other alternative is to drop the LL as the main currency and adopt the US Dollar since evything is quoted in USD in Lebanon. Ecuador did exactly that when their currency collapsed.

a certain party needs chaos to protect its arsenal, so it's never gonna happen....

Berri's financial 'expert! Everybody in Lebanon is a self-proclaimed expert. Diab himself a teacher who is also a self-proclaimed independent (appointed by hezbollah) and a class-room expert. Applying for immigration to Canada Monday!

why is it difficult? they just have to ask those billionaires of politicians to give back their stolen money, no? isn't it why they took power to put corrupts behind bars?
oh! no! it is to protect them, sorry.....

Obviously this self-proclaimed expert has no clue; typical of all corrupt Lebanese politicians. The dollar did not weaken but it was/is a short term fix by the central bank. It is supply and demand in a bankrupt economy and debt ridden country. Capping the dollar at 2,000 is a very short lived measure as the demand by far exceeds the supply ( Economy Basics 101 ).