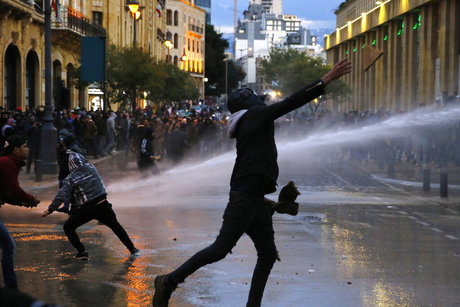 Security forces fired tear gas and water cannons at anti-government protesters in central Beirut on Wednesday afternoon, after some of them hurled stones firecrackers and uprooted trees and began dismantling a huge security barrier outside Nejmeh Square.

The area had witnessed overnight clashes during a demo rejecting the country’s new government.

As soon as protesters arrived at the site on Wednesday, some of them mounted the metallic wall and barricades outside Nejmeh Square as other started dismantling the security barrier.

Protesters later torched a tent belonging to security forces on the edge of Nejmeh Square and smashed the facade of one of the shops.

The clashes were still raging after around four hours from the eruption of the confrontation although riot police, assisted by commando forces from the Internal Security Forces Intelligence Branch, managed to clear protesters from the area around parliament and from the premises of the luxury Beirut Souks shopping complex.

The protesters have since retreated to the area near Kataeb Party’s headquarters in Saifi.

More than ten people were injured in the fierce clashes.

LBCI TV had earlier reported that security forces in Dahr al-Baydar stopped dozens of buses coming from the Bekaa and prevented them from heading to Beirut. Several arrests were also made.

Internal Security Forces commandos also set up a checkpoint on the highway near the Casino du Liban where they searched buses and vans carrying protesters to central Beirut.

The new government, which comes three months after former Prime Minister Saad Hariri resigned, was rejected by protesters who have been calling for sweeping reforms and a government made up of independent technocrats that can deal with the country's economic and financial crisis, the worst since the 1975-90 civil war.

Even before the Cabinet was announced, thousands of people poured into the streets, closing major roads in the capital of Beirut and other parts of the country in protest. The protesters complained that political groups still were involved in the naming of the new ministers, even if they are specialists and academics.

"We want a government of experts ... who are they kidding?" said one protester, Fadi Zakour. "We have been protesting for 90 days and we are not happy to close roads," he added.

Diab saluted the protesters in the street and vowed to "work to fulfill your demands." In a speech addressing the country following the government announcement.

Although the government announced Tuesday is technically made up of specialists, the ministers were named by political parties in a process involving horse trading and bickering with little regard for the demands of protesters for a transparent process and independent candidates.

Panic and anger have gripped the public as the Lebanese pound, pegged to the dollar for more than two decades, plummeted in value. It fell more than 60% in recent weeks on the black market. The economy has seen no growth and flows of foreign currency dried up in the already heavily indebted country that relies on imports for most basic goods.

lol @dic the christian shia from dahieh in portugal.