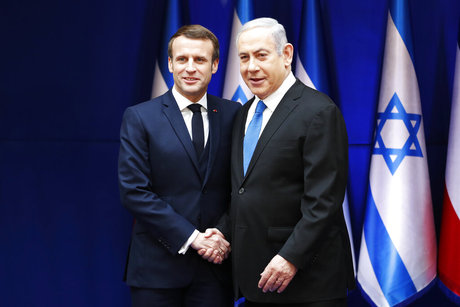 Israeli Prime Minister Benjamin Netanyahu might urge Russian President Vladimir Putin to curb Iranian influence in Syria and French President Emmanuel Macron to push back against Iran in Lebanon at this week's 75th anniversary of the liberation of Auschwitz, experts said.

Pro-Iranian militia in Syria have stepped up their efforts to launch attacks against Israel, which has responded with air strikes -- including on Damascus.

Iran also has considerable sway in Israel's northern neighbor Lebanon through its backing of the powerful Hizbullah.

Last year, the Israeli army accused Hizbullah of building -- with Iranian support -- a facility where rockets could be converted into precision guided missiles.

The Israeli army has warned that, once operational, such missiles would be more difficult to repel than standard rockets and could inflict substantial damage on Israel's soil.

France, which as a colonial power held a mandate in Lebanon, still has influence in Beirut.

Netanyahu raised "Hizbullah's project to manufacture precision missiles" during his closed door meeting with Macron on Wednesday, a statement from the prime minister's office said.

Speaking alongside Israeli President Reuven Rivlin later on, Macron pledged "vigilance" against "any form of terrorist activity that could be carried out from Lebanon that would threaten Israel's security," without giving details.

An Israeli security source who requested anonymity suggested to AFP that if Hizbullah leader Sayyed Hassan Nasrallah was persuaded that the guided missile project was "too risky... he will stop it."

Iranian Basij forces commander Abdolhossein Mojaddami was gunned down in front of his own home on Wednesday in the Khuzestan province of Iran, news agency IRNA reported.

He was killed by two men who wore masks and were riding a motorcycle, Iranian media reported.