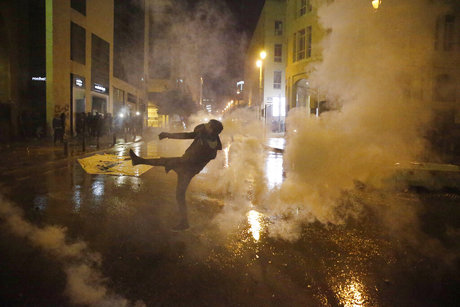 Lebanon's new government, made up of members nominated by Hizbullah and its allies, got down to business Wednesday, a day after it was formed. Questions arose immediately about its ability to halt a spiral of economic and political collapse.

As the government headed by Hassan Diab held its first meeting, protesters briefly closed off major roads in and around the capital Beirut, denouncing it as a rubber stamp for the same political parties they blame for widespread corruption. Later on Wednesday, a few hundred protesters from northern and eastern Lebanon engaged in violent confrontations with security forces in downtown Beirut.

Police used tear gas and water cannon to disperse the young men, who ripped tiles off of buildings in downtown, breaking them up to use as stones to throw at police. Thick grey smoke hung over the city center as police fired volley after volley of gas canisters that left protesters wretching and gasping for breath.

Diab vowed to tackle the country's crippling crisis -- the worst since the 1975-90 civil war -- saying his Cabinet will adopt financial and economic methods different than those of previous governments. But analysts said it was highly unlikely a government backed by Hizbullah and its allies would be able to drum up the international and regional support needed to avoid economic collapse.

Hizbullah is considered a “terrorist” organization by the U.S. and oil-rich Gulf countries whose support is badly needed for debt-ridden Lebanon. The European Union considers the military wing of Hizbullah a terrorist organization.

"These ministers and this government will not be able to make independent decisions related to the economy or the political situation, so long as their decisions are up to the parties that formed this government, first and foremost Hizbullah," said political analyst Youssef Diab.

Protesters first took to the streets in mid-October in a mass uprising against the country's ruling elite, which they blame for decades of corruption and mismanagement that have brought Lebanon to the brink of economic collapse.

Since then, the country has sunk deeper into a political crisis. The Lebanese pound, long pegged to the dollar, has lost up to 60% of its value against the dollar and banks have imposed unprecedented capital controls to preserve liquidity.

Although the government announced Tuesday is technically made up of specialists, the ministers were named by political parties in a process involving horse trading and bickering with little regard for the demands of protesters for a transparent process and independent candidates.

There was no immediate comment from U.S. officials to the government formation.

violence is not a solution as it gives the gvt a pretext to crush the protest with even more violence and discredit and demonize the whole revolution. the opponents can then gloat and say that it is not a true revolution but just thugs ruining the country.

violence is not a solution as it gives the gvt a pretext to crush the protest with even more violence and discredit and demonize the whole revolution. the opponents can then gloat and say that it is not a true revolution but just thugs ruining the country.

Poor Lebanon..how we became the joke of the world!
A half dead president and a party that pledges allegiance to Iran are now in control ..let the show begin!