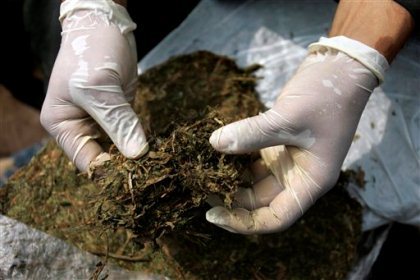 Greek authorities said Thursday they found more than a ton of processed cannabis camouflaged among a shipment of date paste headed by sea from Lebanon to Libya.

A police statement said the drugs were discovered on Jan. 16 in a ship's container on a freighter that had stopped at Greece's main port of Piraeus.

The statement said the raid was carried out in cooperation with U.S. and Saudi authorities. No arrests were announced. A total 1.25 tons of processed cannabis were confiscated.

Greek police said the drugs were loaded in Beirut and were destined for the Libyan port of Misrata.

Don't forgot they alreadyhad their payment before shipping the goods. Can't see them returning it because of non-delivery.

Less revenues for Ebola. This kind of quantity does not get out of the Bekaa without their blessing. More likely, this is their work.

The Shia drug dealers already got paid.... only the buyer and transporter are losing money.

Its peanuts to Kizb and will not slow down their progress not by an means. Its a lucrative business for them and they are a lot more reliant on its income especialy since the Ayatolla of Rockinrolla has beeb forced to reduce his export funding.