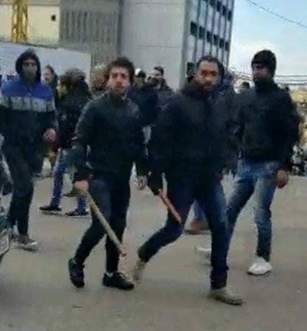 Interior Minister Mohammed Fahmi on Friday announced the arrest of two of those who attacked anti-corruption protesters outside the Council for South in the Beirut suburb of Jnah.

"They are being interrogated to identify the motives, reasons and instigators behind the attack on protesters," Fahmi said in a statement.

"They will be referred to the relevant judicial authorities for the necessary legal measures against them and security agencies are continuing their raids to arrest other assailants who took part in the attack on protesters," he added.

Fahmi had earlier condemned “the barbaric behavior that peaceful demonstrators, including women, were subjected to on their way to a sit-in outside the Council for South.”

“Among the Interior Ministry’s missions and priorities is the protection of all citizens, be them protesters or not, and the prevention of acts of rioting and vandalism,” Fahmi said.

The Ministry “will not allow security violators to insult the dignity of any citizen, under any circumstance, excuse or reason,” the minister stressed, noting that “protesting and assembly is a legitimate right enshrined in the law and all humanitarian and ethical norms and applicable regulations.”

Videos circulated online and broadcast by TV networks show the anti-corruption protesters coming under attack by supporters of the AMAL Movement.

The assailants, whose faces appear clearly in the videos, were carrying sticks, knives and blades.

In one of the videos, an attacker is seen assaulting a female protester who was filming the confrontation.

Sow how is the Kizb govenrment supposed to respond to this? Will kizb government members arrest Kizb followers?

Ministers should immediately resign before they become the Useful idiots in this Hizbollah government being blamed for Lebanon destruction and bankruptcy. That has been Hizbollah and Iran policy for years because they can only control and indoctrinate the Country if it is bankrupts and run by their mobs. Educated, professionals and businessmen were the enemy of the Green Revolution in Iran. That is why Hizb and accomplices systematically destroyed our schools, economy and now the banking sector so they can easily control the country and its institutions. They will soon use the army and security to brutally suppress the Thawra in the name of restoring peace and protecting the lira.

Ladies and gentlemen, readers, this is the ‘Resistance’ .

Resistance is futile, I learned this the hard way.

Crispy and crunchy Soleimani.... I bet you aren’t feeling the cold weather down there in Skeletor’s company.

Soleimani is a VIP down here. He likes it hot and sweaty.

You guys have this all wrong, they were taking out their anger due to the news that the US will be releasing the plan of century and Palestine will no longer exist. So don't blame them but blame the Zionist and Americans... After all everything that happens in Lebanon is because of the west and the Zionist

HIZBALLAH + AMAL = the forces of DECEPTION (HEY!!! thats what the Zionest do)
aren't they a lovely TRIO of Eternal Chaos...

Look at these Losers welding sticks against ladies.... WOW scary

Boy I can't wait to see these guys loosing their Fake Jobs in the Lebanese Railway Company... then Watch out Berri and Nassri they will be Hungry!!!!

He is being sarcastic man!!!

Thanks Justin but its good to see him go...

Nabih Berri, the Sierra Leonian, one do the worst remaining cancer of Lebanon should be hanged.

Only 2 arrested ! What a farce. Their leaders and instigators should also be arrested. These thugs could only be manipulated and paid by Amal as a political movement headed by the speaker of parliament Nabih Berri. Shameful !

Sheikh Qabalan Qabalan is one of instigators.

The thing to withhold is that one the protesters dared to face these ugly faced thugs and two, two of the aggressors were actually arrested; it's a start, a shy start but a good one at least!

I would love to see a picture of how and where he is holding two people....those two he arrests will pay him a visit at night when he is in bed.