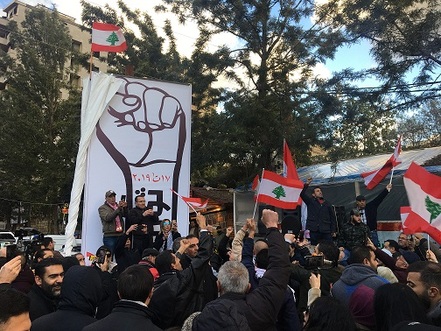 Anti-government protesters in the southern city of Nabatieh on Friday unveiled a “fist of the revolution” statue to commemorate 100 days since the beginning of the October 17 popular uprising.

The ceremony was held amid tight security measures taken by the army and Internal Security Forces, as supporters of Hizbullah and the AMAL Movement staged a rival demo at the location, chanting slogans supportive of Hizbullah chief Sayyed Hassan Nasrallah and Speaker Nabih Berri.

A representative of the Hizbullah and AMAL supporters said their demo was not aimed at “stirring a problem with the protest movement or anyone else.”

“But these people are provoking us by raising this fist in Nabatieh. This city only raises the fist of Imam Hussein and Nabatieh expelled the occupiers and offered martyrs and will not accept such a symbol, a symbol of the international masonic movement. It should be removed and we will not accept that it stays in its place,” the spokesman said.

The protester Ilda Mazraani meanwhile said that Nabatieh’s protest movement “will continue its peaceful uprising until the fulfilment of demands,” urging all “free Lebanese” to “defend their right to dignified living and national dignity.”

They must be Zionist...

Maybe you just want Lebanon and Canada to be free from the US and Israel but not from Iran ... Well I and the majority of UNARMED citizens want USA, Israel AND IRAN OUT!!!!

If you don't get them out you will not have a NICE COUNTRY my friend... you know a Government and institutions that kind of WORK for the Good of ALL Citizens!!!! You know like Canada!

Were all zionist Canleb loool and everyone who disagrees with us is a double zionist too! lool

Wishful thinking Lebcan ya alf riet. We may not see it in this lifetime.....