Dar el-Fatwa Did Not Ask Fahmi to 'Reject' Portfolio 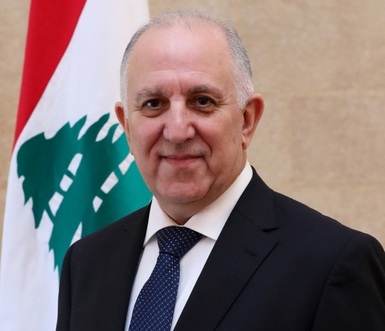 Interior Minister Mohammed Fahmi denied reports claiming that Dar el-Fatwa, the highest Sunni authority in Lebanon, has urged him to renounce the interior ministry portfolio, his media office said in a statement released on Saturday.

The statement said that Fahmi “denies reports circulated on social media that the Minister received a phone call before the government was lined-up from Dar el-Fatwa asking him to reject the ministerial seat.”

However, the statement stressed that “Minister Fahmi is keen on the national and Islamic role of Dar Al-Fatwa, led by Mufti of the Lebanese Republic, Sheikh Abdul Latif Deryan, whom he highly respects.

A lackey of syria and hezbollah

Why does Fahmi have the lebanese citizenship? His father is 100% dirty egyptian, his mother is lebanese mitwelian from the Zein family.

since when mothers pass on their citizenship? Why him and not worthy children of Lebanese women?

Just like Hassan Diab the Syrian from Damascus, he got the Lebanese citizenship in 1995, by decree of the corrupt Elias Hrawi.

Do you have any idea how many lebanese are of either syrian or palestinian origin? A large segment of the maronites have syrian origin. Sunni families like the safadi, ghazzaoui, akkawi, nabulsi to name a few have Palestinian background. George irde7i has Palestinian origin. My brothers wifes mom is shia lebanese from syrian damascene origin. People became lebanese based on where they were located when the lebanese nationality/citizenship was handed out. Back then, many levantine people would go from city/village to city/village within the Levant freely depending on work/marriage etc. The famous Palestinian hijacker Leila Khaled is of lebanese origin. The majority of Palestinian christians who ended up refugees in lebanon were neutralized along the way. As were the armenians. You would be opening a pandoras box by denying these two men their "lebanesehood".

It would be ridiculous to claim someone who got his lebanese citizenship in 1995 can't be lebanese if you at the same time consider the one who got it in 1940 or 1964 or 1988 to be.

Diab is born in Damascus and doesn’t have Lebanese ancestors. So why the privilege of acquiring the citizenship before other people born here and who’ve live here ?

My issue is with the presidential decrees who sell the citizenship to a few privileged who can afford paying for it. (Hundreds of thousands of USD)

I don’t care about their sects, the two I used as example are Sunni like me yet I criticize them, right?

Presidents should not have such rights. Especially in Lebanon .

As for Fahmi, he’s Egyptian, so it isn’t even a neighboring country, why the privilege? Because he served the Syrian regime under Hafiz el Assad.

None of them deserve it.

the law is clear

1st : jus soli (birthright citizenship) doesn't apply in our country.
2nd : jus sanguinis (a child born to a Lebanese father) confers citizenship.
3rd : a woman can get the citizenship if she is married with a lebanese man
4th : there is a law for descendants of Lebanese origin, who can prove they have old Lebanese ancestors (present in Lebanon in 1921).

This guy Fahmi and Hassan Diab doesn't apply to any of this cases.

This guy Fahmi got citizenship because he served hafez al assad's regime interests in Lebanon.

He is a lackey of the same kind of his friends Jamil Sayed and Emile Lahoud, the worst Lebanese traitors. This guy should be stripped citizenship immediatly and sent back to Egypt, or Syria.

Any Lebanese outside Lebanon is worth better than him 1 million time.

It's not about racism or discrimination, but there's a reason why in America people who got naturalized can't become US presidents for instance. For instance Austrian born Arnold Schwartznegger. Yes, he became governor of California but he obtained the greecard first then the US citizenship.

Diab or Fahmi bought their Lebanese citizenship by corrupt means, they represent a threat to the nation. Diab the AUB professor is morally corrupt, he tried to impose his son for a professorship then he claims to lead a cabinet of clean independent technocrats. LMFAO

he's a son of Bashar like most of the people in this crooked government.