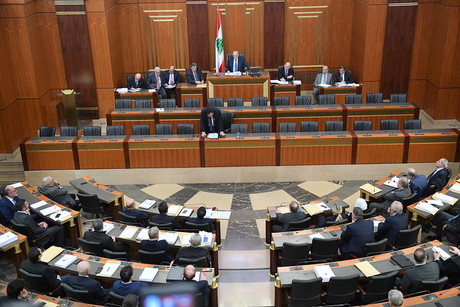 Parliament on Monday approved the 2020 state budget in a controversial session that was boycotted by several blocs and MPs.

MPs from the Strong Lebanon bloc, the Loyalty to Resistance bloc, the Development and Liberation bloc and the Social Nationalist bloc in addition to the lawmakers Nicolas Nahas and Adnan Trabulsi voted in favor of the bill, a total of 49 legislators.

The Democratic Gathering bloc meanwhile abstained from voting as MP Farid al-Khazen voted against the budget. As for the al-Mustaqbal bloc, some of its members abstained as other members voted against.

The 2020 budget was drafted by the government of former Prime Minister Saad Hariri, who resigned in late October in response to nationwide protests.

Shortly before noon, more than half the 128-member parliament were present, giving the needed quorum for the session to begin, amid clashes between protesters and security forces in the area around the parliament. The Lebanese Forces, the Kataeb Party and a number of independent MPs boycotted the session.

That would be only a tiny drop from the planned deficit of almost 7.6 percent of GDP for last year, after a shortfall of 11.2 percent in 2018.

The last government had promised a deficit of just 0.6 percent for 2020, but Kanaan said that was now impossible as the unravellng economic crisis had caused projected revenues for the year to decrease.

Prime Minister-designate Hassan Diab attended the parliament session without any other member of his Cabinet. When pressed by members of al-Mustaqbal bloc whether he would adopt the budget drafted by the former Cabinet, Diab said: "Had we not adopted the budget we wouldn't have come today."

The national currency, which has been pegged to the dollar since 1997, lost about 60% of its value in recent weeks, raising alarms among many Lebanese who have been losing their purchase power.

Legislator Salim Saadeh listed Lebanon's financial and economic problems, ranging from the massive debt to the drop in the local currency.

"We are like someone drowning in mud but at the same time standing in front of a mirror and brushing his teeth," Saadeh said

so when they need to elect a president they claimed they needed a qorum of majority, now all of a sudden no forum needed. What a dysfunctional paralyzed banana republic

can someone explain me this scam? how can less than a half MPs voted in favor and it is adopted? waw! what a "democracy"!

TFEH on those useless people!