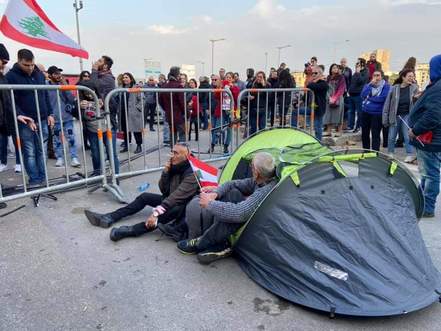 Anti-government demonstrators on Tuesday flocked to Martyrs Square in downtown Beirut to assist their comrades in re-blocking roads reopened by security forces.

The roads that go through the protest camp had been closed by security forces since the first days of the October 17 uprising.

Some of the protesters arrived in a convoy from Zouk Mikail to help their comrades at the square.

Security forces had removed the metallic barriers and reopened the road from An-Nahar newspaper’s building towards the Mohammed al-Amin Mosque.

Protesters rejected the move and re-blocked the road with their bodies and returned the metal barriers to their place. They also parked a car in the middle of the street, waving Lebanese flags and chanting revolutionary slogans.

Later in the day, Interior Minister Mohammed Fahmi issued a statement denying that he has ordered the removal of the protest camp and noting that the removal of metal barriers was aimed at "facilitating the flow of traffic."

He also emphasized on "the freedom of peaceful assembly and expression," describing it as "a right enshrined in the constitution and applicable laws."

The coppers have not business there, they should strop protecting the crooked ruling class and focus on the people instead. We all know that Abbas Ibrahim, Imad Othman and Joseph Aoun are the top 3 corrupt armed forces commanders. They were all selected for their loyalty to the corrupt mafia ruling this country. There’s nothing good to expect from such people.