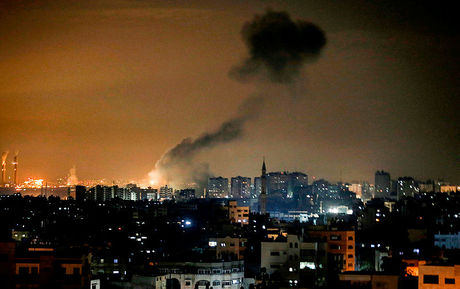 Israeli aircraft struck Hamas positions in Gaza early Wednesday, the military said, after Palestinians in the enclave launched projectiles and explosive balloons at the Jewish state.

The "fighter jets targeted Hamas terror targets in the southern Gaza Strip" including "a weapons manufacturing site", the army said in a statement.

There were no immediate reports from Gaza of casualties.

Prior to the Israeli attack, militants in Gaza launched three projectiles and a number of "explosive balloons" at southern Israel, the army said, with neither medics nor police reporting casualties or damage.

Since US President Donald Trump's announcement last week of his plan to resolve the Israeli-Palestinian conflict, rockets, mortar shells and explosive balloons have been launched almost daily from Gaza into southern Israel, provoking Israeli retaliation.

Hamas and Israel have fought three wars since 2008 but over the past year the Islamists have gradually shaped an informal truce with Israel, under which the Jewish state has eased its crippling blockade of Gaza.

As the famous song goes "When will they ever learn?". With Hamas, the answer is simple - NEVER