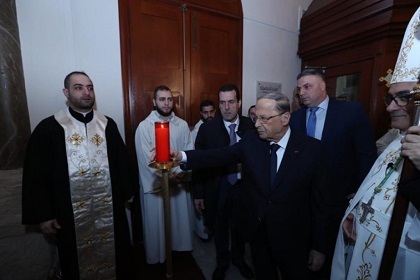 Maronite Archbishop of Beirut Boulos Abdul Sater on Sunday noted that “a true leader is one who resists the naturalization (of refugees) and one who chooses to leave rather than disappoint or harm his people.”

“A true leader is not one who believes that the country is a property for him and for his children after him or one who monopolizes power and aggrieves those who placed their confidence in him,” Abdul Sater said in a sermon marking Saint Maron’s Day.

“Don’t the tens of thousands of Lebanese who elected you deserve that you fix the flaws in the political, economic and financial performance and that you work night and day with the true revolutionaries on securing what provides decent living to every citizen? Otherwise, resignation would be more honorable,” the archbishop added, addressing Lebanon’s politicians.

“What are you waiting for?” he asked.

hmmmmm..... and who could that be??? Must be the Strong President Michel Naeem Aoun who naturalizes anybody as long as they pay for it.

Aiwa. That’s why clerics shouldn’t meddle with politics, they weaken their own communities and destroy the credibility of their own institutions.

I wonder what the Lebanese expatriate communities in North and South America who have received citizenships of the countries they fled to, think about this. Or is it that NONE of the leaders of those countries are TRUE leaders.

The Lebanese expats in the Americas didn’t bother passing down their Lebanese citizenship to their kids and grand kids. At least that’s the case in my family in the US and Brasíl. They don’t want to have ties with their motherland unlike Palestinians and their Palestine they dream of.

Well, many Palestinians would willingly become Lebanese and leave any passing of a Palestinian citizenship that anyway never existed. So why baring them this right ?

who would dream of becoming lebanese? one of the worst nationality in terms of mobility...

and this pos probably carries a european nationality!