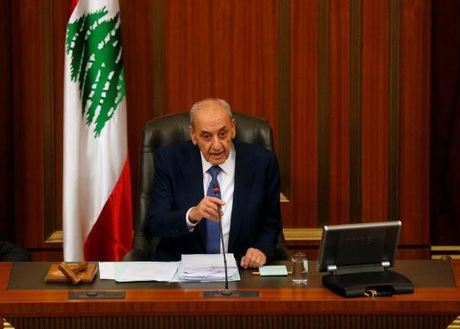 Speaker Nabih Berri stressed on Tuesday that the Parliament session dedicated for a Cabinet confidence vote and discuss the Policy Statement secured quorum with 67 lawmakers attending at the opening.

He said lawmakers of the Strong Republic bloc, MP Setrida Geagea, of the Lebanese Forces party joined after that.

In a tweet, Kataeb MP Sami Gemayel said the session was unconstitutional because it convened without securing quorum.

“Opening the confidence session without quorum violates internal laws, is unconstitutional and draws a blow to democracy and challenges Lebanese protesters,” he said.

through major initiatives such as a Cabinet confidence vote.

Two third 90+ so is it time for you to retire and leave us alone.

So Berri and the other thieves make just as they please and interpret the law as they see fit?
Go To Hell!

When would politicians finally admit that Lebanon is extremely weaker politically, financially and military because of the economic crisis that is 99% caused by Hizbollah's arms and foreign agenda? It is Hizbollah that caused the exodus of all good paying western firms, soured our relation with Gulf nations that employs most expatriate Lebanese, and prevented investments that slowly and gradually shocked our economy instead of being the most vibrant in the region. Economic recovery is impossible without disarming Hizbollah and until the Thuwar acknowledge this reality there is no hope for Lebanon and this Hezbollah’s government of traitors that each sold Lebanon for 30 pieces of silver.

The Thawra has messed up big time by resorting to violence instead of the million-person peaceful march without blocking any road. It has fallen in the trap by Hizbollah and FPM and created friction with army and businesses. It is time to regroup, reorganize the plazas and reconnect with our prime objective of new election by this summer.

This will be a multi-front effort. The write-in campaign to put Bassil and Berri on the list of US sanction have started. Let us hope for 1,000 letter sent this month by professional Lebanese-American to their respective senators, president Trump and Mike Pompeo. Sample draft letters are available for those who needs it.

It's about time the quorum law was repealed. That way all MP's would know that it is imperative to be in Parliament as their individual vote is important.