Biden: From Democratic Frontrunner to Edge of Collapse 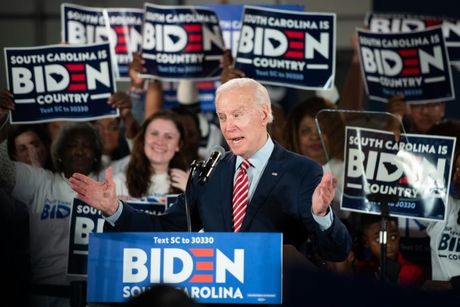 Joe Biden is heading south, in more ways than one.

Once the confident frontrunner for the Democratic nomination, America's centrist senior statesman meant to invigorate his party's effort to oust Donald Trump and reclaim the White House.

But the electability candidate, the one who insists he has the best chance at defeating Trump in November, has seen his political fortunes plunge in a single week.

After what he called a "gut punch" of a fourth place finish in the opening contest in Iowa, on Tuesday he faced a second straight drubbing, on track for a shock fifth-place finish in New Hampshire, early results showed.

The former vice president saw the writing on the wall and abruptly scrapped plans to spend primary night in New Hampshire, jetting to his stronghold of South Carolina, where a diverse Democratic electorate votes later this month.

With the rise of leftist Bernie Sanders, a senator from neighboring Vermont, Biden faced a severe uphill climb in New Hampshire.

But in an embarrassing turn, the 77-year-old Biden was also beaten by Pete Buttigieg, a moderate former small-city mayor less than half his age, and pragmatist Senator Amy Klobuchar. Senator Elizabeth Warren was eclipsing him too.

No one in the modern history of the Democratic nominating process has performed so poorly in the first two statewide contests and gone on to win the nomination.

The hemorrhaging of support is coast to coast. A Monmouth University poll released Tuesday shows Biden's nationwide score dropping by nearly half, from 30 percent before Iowa's caucuses to 16 percent this week.

In the RealClearPolitics aggregate of recent nationwide polls, Biden has now relinquished the top spot that he has held for more than a year, with Sanders at 23 percent and Biden at 20.4 percent.

"I don't know that I've seen a sadder week in a campaign than Joe Biden's in New Hampshire," political science professor Dante Scala, of the University of New Hampshire, told AFP.

"Voters liked Joe Biden well enough, but there was no measure of devotion," he added. "So when he disappointed in Iowa, they went shopping for other candidates."

It all marks a stunning decline for the party establishment favorite who is deeply respected among Democrats for his eight years as wingman to popular president Barack Obama.

Biden has argued credibly that neither Iowa nor New Hampshire, whiter and other than most of the other 48 states, is a good barometer for the Democratic race and the party's electorate.

But bouncing back from a double disaster will take remarkable persistence and focus.

His campaign energy has come under scrutiny. He spent Thursday huddling with advisers instead of earning votes. He has stumbled on the trail, often responding to questions with "Come on, man!"

In the last debate he conceded he would lose New Hampshire, violating the unwritten rule of eternal optimism.

And he recently lashed out at a voter who questioned him, calling her a "lying dog-faced pony soldier."

Biden, speaking Tuesday from South Carolina where he sought refuge from his New Hampshire beating, insisted he was still in the game, saying the first two states signaled the "opening bell" of the race.