Pompeo: Hariri’s Killers Must be Brought to Justice 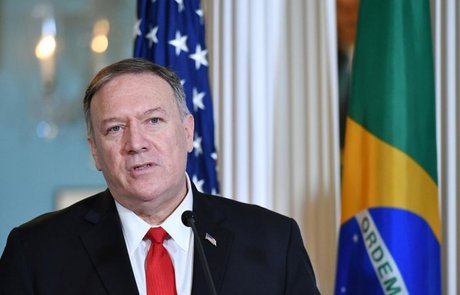 U.S. Secretary of State Mike Pompeo said on Saturday that “Hizbullah” individuals involved in the “terrorist” assassination attack of ex-PM Rafik Hariri must be brought to justice.

Pompeo issued the statement marking the 15th assassination anniversary of Hariri, saying the crime was an act of “mass murder that killed 21 individuals and injured 266 others in Beirut.”

“Ending impunity is imperative to ensuring Lebanon’s stability and sovereignty,” he added, affirming “U.S. support for the work of the Special Tribunal for Lebanon on this case to hold those responsible accountable.”

He said that Hizbullah’s “terrorist and illegal activities” have demonstrated more care for its own interests and those of its patron, Iran, than it does for the interests of the Lebanese people.”

The U.S. “proudly stands by the Lebanese people in their peaceful calls for reform, transparency and accountability,” he added.

Several Hizbullah members have been indicted in the 2005 assassination of former Prime Minister Rafik Hariri, but they were never arrested.

Hariri's killers and their criminal boss reside in dahieh.

lol@dic.portugal the shiia christian from dahieh of Portugal.

n my opinion the killer of HARIRI´S father was the Cristhians!!! Hariris father, like the son want´s to roube Lebanon to the Catholiqs to give to Meca...and have the suport of the Israelis!!!

All these fantasy comments I read on here, are pure imagination and fantasy. The truth of the matter is that Bashar el-Assad sponsored and organized this heinous crime, with the obedient help of Hizbullah who perpetrated this horrible mass murder. Sooner or later these criminals will pay dearly for their crime. As to Assad, he and his regime will fall and he will face the judges of the International War Crimes Tribunal at the Hague, like other high-ranking criminals already have : Khmer Rouge (Cambodian genocide), Ivory Coast, Serbia (Milosevich) and soon Omar al-Bashir (Sudan's Darfour massacres)...

Let us consider motive. Was this old Hariri getting ready to reject the coopting of Lebanon's Sunnis by the NATO-KSA-"Christian" cabal? How did he justify Article 24 which gives half of the chamber of deputies to "Christians"? Israel believes Judaism can be passed on by blood. I've never before heard it claimed of Christianity, but this Constitutional Article proclaims it. Census questions: are you a Christian? Was your mother a Christian? Do you have supporting documents?

the evangelicals do not like that the "portugueses" defend Lebanon Cristhianity...that´s why the evangelicals of usa support the destabilization of Meca...the evangelicals+meca are putting a sowrd in the head of the cristhians in Lebanon and asking...convert or die...