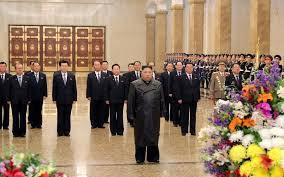 North Korea's Kim Jong Un marked the birth anniversary of the country's former leader Sunday, in his first reported public appearance in over three weeks as a deadly coronavirus rages in neighboring China.

Kim "paid high tribute" to his father Kim Jong Il at the Kumsusan Palace of the Sun in Pyongyang that holds the embalmed bodies of his father and grandfather, the official Rodong Sinmun newspaper reported.

The COVID-19, which originated in China and has killed more than 1,600 people, has alarmed the North, prompting it to close its borders and suspend all flights and trains to and from its giant neighbor and most important ally.

Pyongyang has said nothing about cases in the North, but it has stopped international tourism and extended the quarantine period to 30 days for those suspected of carrying the virus, including foreigners.

The appearance is Kim's first in 22 days after he attended Lunar New Year festivities then disappeared from the public eye amid global concern over the coronavirus outbreak.

The North has poor medical infrastructure and a chronic shortage of medicines and has taken similar action in the past -- it banned tourists for more than four months from October 2014 to keep out the Ebola virus, even though no cases had been reported in Asia.

At Mansu hill in Pyongyang on Sunday, a steady stream of North Koreans lined up to pay their own respects, placing flowers at the feet of the giant bronze statues of Kim Jong Il and Kim Il Sung, the country's founder.

The anniversaries of the births and deaths of the two elder Kims are major holidays on the North Korean calendar, with February 16 celebrated as the Day of the Shining Star.