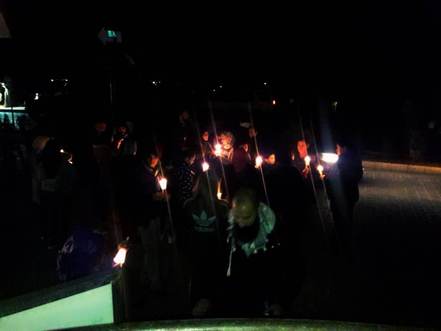 Anti-government demonstrators on Tuesday held candlelight vigils in Beirut, Baalbek and Tyre in tribute to Ahmed Toufiq, a protester who died of his wounds Monday after being injured in clashes in the northern city of Tripoli in October.

Toufiq was injured by gunshots fired by the army during a violent demo on Tripoli’s Jemmayzet Street during which a hand grenade was hurled at the army without exploding.

Allah yir7amo, i read his name in the obituaries on kholood/Naharnet.
Killed by the glorious LAF who shoots at demonstrators only... his blood is on Joseph Aoun’s hands.

My dear, the day the LAF soldiers will shift their guns from protecting the ruling class to protect the revolution (when it will start) no crooked politician will be spared, I guarantee you this.

The problem is that the soldiers have to grow a pair before doing so, and unfortunately they once followed a general (an imp) that led to the destruction of the LAF pride, which it hadn't recovered since then!