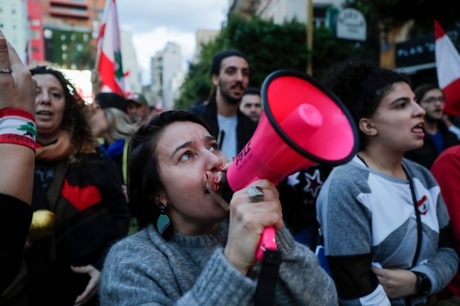 Lebanese protesters rallied on Thursday outside headquarters of the economy ministry in Downtown Beirut to protest against uncontrolled hike in prices of consumer goods.

Demonstrators said the ministry must activate its role and monitor prices of goods amid a crippling financial and economic crisis that left many unemployed.

General Director of Economy and Trade at the Ministry of Economy, Alia Abbas, spoke to protesters assuring them that the Consumer Protection Authority operates with “transparency and its doors are open to all.”

Abbas said judicial authorities were asked to take appropriate measures against “greedy” merchants, even if it meant closing down their businesses. She assured that ministry inspectors “are doing their job.”

She urged all Lebanese to join efforts and cooperate with the ministry by filing complaints against shops and supermarkets manipulating prices of goods.

But the protesters said the ministry’s efforts were “insufficient,” and called for tighter measures.

Lebanon has been suffering from slow growth, high unemployment and decades of widespread corruption and mismanagement that have triggered nationwide protests against the political elite since mid-October.

The local currency has lost nearly 60% of its value on the black market. Lebanon also has a massive debt, standing at $87 billion — 150% more than the country's GDP. Amid a severe liquidity crunch, banks have imposed informal capital controls, limiting withdrawals to a few hundred dollars a month. The country's economy has depended heavily on the U.S. dollars since the country's 15-year civil war ended in 1990.

Prices are up and the Lebanese lira is worth less.... a double sentence and the worst is still to come.

The prices are up BECAUSE the lira lost its value. It s still the same sentence

Prices can go up because there isn’t enough supply for particular products/ services not necessarily because the currency is devaluating.in Lebanon’s case 70% of the people’s savings are in dollars yet the dollars have been stolen by bank “owners” so buying goods shouldn’t be affected by the value of the lira as we’ve always paid in dollars when importing.

The prices are up BECAUSE the lira lost its value. It s still the same sentence