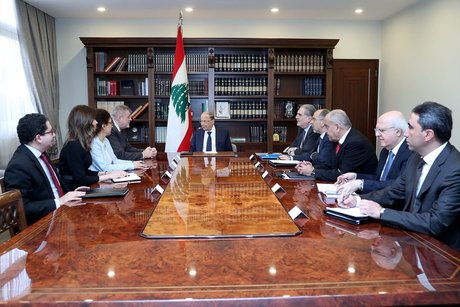 NNA said the meeting was held in the presence of former minister Salim Jreissati and other figures.

Kubis affirmed that "the United Nations supports implementation of reforms intended by the Lebanese government."

For his part, Aoun stressed “the most important government battle is its battle against corruption,” noting that several “measures will be taken to protect the monetary situation and rights of Lebanese.”

The meeting comes as Lebanon awaits advice from international lenders on dealing with the country's crippling economic and financial crisis.

strict steps to mitigate the economic crisis before any outside help.

He said Lebanon will not benefit from any outside help if it’s government fails to implement “reforms and come with a clear action plan with deadlines.”

Aoun is the reason why the country collapsed... and tries to act like a savior. Die now!

I am negotiating with him as we speak... He promised me he'll do it before his next birthday.

I wouldn’t trust him on his promises... you need a contingency plan for such evil creatures.