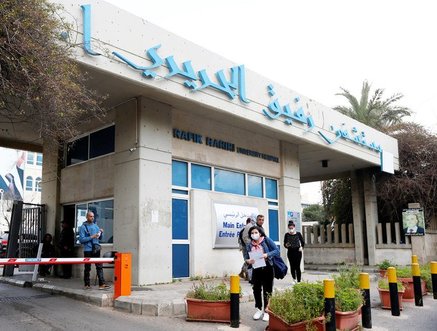 Lebanese were up in arms on Saturday demanding a halt to flights from Iran one day after the first case of coronavirus was confirmed in a 45-year-old Lebanese woman who had traveled from Qom in Iran.

He added: “Protection procedures from the disease will be activated more and more,” noting that the “woman’s health is getting better.”

A medical source at the hospital where the woman is being treated said that she returned from Iran with a high fever, but that her immunity was good and her condition stable.

Hamad also said that two other suspected cases in the southern town of Nabatieh were being “monitored closely.”

The Minister's statement that an Iranian flight bound for Beirut will be allowed to land in Lebanon has sent a wave of anger among Lebanese.

On Friday, Iraqi and Kuwaiti authorities were on high alert after banning travel the previous day to and from Iran, where authorities say the death toll from the new coronavirus has hit four.

Lebanese, already grappling with an unprecedented economic crisis, took to social media demanding a similar ban for flights from Iran.

"We have enough crises on our plate," one Lebanese said in a tweet, "We can definitely do without a novel problem whilst one that robs us our health."

“The government must stop all flights coming from Iran. Our health is more important than anything else,” another Lebanese tweeted.

This government needs hezbollah's approval to suspend flights from and to Iran. These flights bring cash and sophisticated technology to hezbollah. So, their suspension is not that easy.

Iran is infested with Corona virus even by heir own admission.

tfeh! even irak is taking measures! but the coward lebanese politicians wouldn't upset hezbollah and iran....tfeh!
they just do not want to shoudlder any responsabilities! and we have to trust them to take economic measures? what a farce!

really disgusting and a total insult to lebanese people and their intelligence.

Lebanon's problems are always caused by the Shia.... when they don't kill us with weapons they kills us with diseases.

The best thing they can do is to stay among themselves and contaminate only themselves.

For those who fear the virus for their young children, sick or elder friends and relatives there's a solution. It's called Pneumovax 23. It won't stop the virus but it'll provide a protection against the bacterias that attack the lungs after getting contaminated. It's a life saver guys. And you need two shots of this vaccine even if the instructions mention one. you need a second one within a 30 to 60 days window period.

So, he does not care about the health of his nation and is waiting for WHO to instruct him to ban flights from Iran? Criminals that should be brought to justice!

Kizb hates seeing this--it will be hard for them to justify keeping the flights coming in, despite Iranian 'assurances'. Iran doesn't have the resources nor does it care about its people or the people visiting.

"Measures" are not enough. This stance shows that the government is controlled by Iran and Hizbullah.