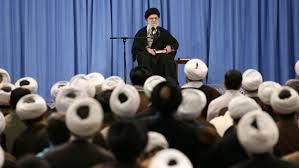 Iran's supreme leader accused foreign media of trying to use a deadly coronavirus outbreak to sabotage a general election, as authorities scrambled on Sunday to contain the disease.

The final results of the parliamentary election are due on Sunday, two days after they were held on the heels of the confirmation of novel coronavirus cases in the country.

A low turnout had been widely forecast, as a conservative-dominated electoral watchdog disqualified about half the 16,000-odd candidates, mostly moderates and reformists.

Voter apathy marked the polls, but Iran's supreme leader Ayatollah Ali Khamenei on Sunday lauded the people's "huge participation" despite what he termed "this negative propaganda."

It "began a few months ago and grew larger approaching the election and in the past two days, under the pretext of an illness and a virus," he said.

"Their media did not miss the slightest opportunity to discourage people from voting. (Our enemies) are even opposed to any election by the Iranian people," the leader was quoted as saying on his official website.

The COVID-19 outbreak has claimed the lives of five people in the Islamic republic since Wednesday. They were the first deaths from the disease in the Middle East.

Authorities have ordered as a "preventive measure"  the closure of schools, universities and other educational centers in 14 provinces across the country from Sunday.

They include the holy city of Qom where the first cases emerged as well as Markazi, Gilan, Ardabil, Kermanshah, Qazvin, Zanjan, Mazandaran, Golestan, Hamedan, Alborz, Semnan, Kurdistan and the capital, Tehran.

Art events, concerts and film shows have been banned for a week.

"In every city, one hospital will be dedicated to treating coronavirus cases," he said, adding that this number would be greater in bigger cities like the capital.

Mohsen Hashemi, head of Tehran's municipal council, said, "If the number of infections increases in Tehran, the whole city will be quarantined."

Posters were also being put up across the sprawling city on Sunday, asking people not to shake hands as part of a coronavirus prevention campaign.

Iran's cyberpolice meanwhile warned that anyone putting "fake clips" online related to the virus would be punished.

The World Health Organization has expressed concern over the speed at which COVID-19 has spread in Iran, as well as it being exported from the Islamic republic to other countries, including Lebanon.

Iran has yet to confirm the origin of the outbreak, but one official had speculated that it was brought in by Chinese workers.

Although official figures are still coming in, Iran's conservatives look set for a landslide win in the 290-seat parliament.

If the conservatives' resurgence is confirmed, it will mean President Hassan Rouhani's slender majority of reformists and moderates elected with fanfare four years ago is nearly purged.

The 11th parliamentary election since the 1979 Islamic Revolution comes after a surge in tensions between Tehran and Washington, and Iran's accidental downing of a Ukrainian airliner that sparked anti-government protests.

Turnout was estimated at around 40 percent nationwide and 30 percent in Tehran at the scheduled close of polls on Friday, according to Fars news agency.

But authorities extended polling for another six hours to allow as many people as possible to vote.

". (Our enemies) are even opposed to any election by the Iranian people," the pos was quoted as saying on his official website.

and that is why he disqualified about "half the 16,000-odd candidates, mostly moderates and reformists".

Those who target Tibet and its monks and the Muslims in China are being cursed and again in Iran because they’re killing real Muslims and other minorities....

It’s the heretics’ and evildoers’ virus.

I didn't think anyone could be dumber than this guy looks but he's just confirmed to me that he is.

The Chinese workers, both of them, spoke with strong English accents about the importance of being woke and how the world is ready for Bernie Sanders all over again for the first time ever.
I guess even AFP doesn't believe that Iran is just unlucky.