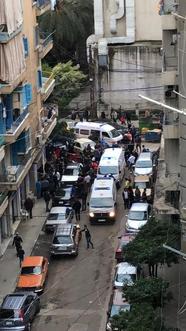 A man hurled a hand grenade Sunday at his brothers inside an apartment in the northern city of Tripoli.

The National News Agency said the man, M. Shahoud, and four of his brothers were wounded in the explosion.

The apartment is located in a building on the city’s al-Thaqafeh Street.

The Lebanese Red Cross evacuated the wounded to hospitals in the city.