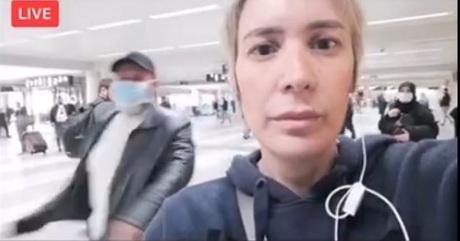 UN Special Coordinator for Lebanon Jan Kubis on Monday defended the rights of journalists for free speech, shortly after a journalist got assaulted at Beirut airport while reporting about flights from Iran amid cornoavirus threats.

“Intimidation and persecution of journalists for expressing their opinion is often a sign that they touch upon something important,” said Kubis in a tweet.

He added: “Efforts to silence free speech by administrative measures and harassment will never succeed and usually backfire, notably in times of crisis.”

A video recording at the terminal of Annahar reporter, Asrar Shbaro, showed a man taking her mobile by force while she was filming passengers of an Iranian plane making their way out of the airport.

Shbaro had also filmed some interviews with passengers of the plane but those were deleted by the attacker, who also claimed to be a member of a political party that was not disclosed.

The Iranian plane had arrived from Iran’s city of Qom where an outbreak of the coronavirus raised concerns.

Lebanese were up in arms demanding the suspension of flights from countries with growing coronavirus disease cases including Iran, Italy and China.

Fears of a global coronavirus pandemic deepened on Monday with a growing number of deaths in Iran and the worsening of other outbreaks across Asia, the Middle East and Europe.

The first case of coronavirus in Lebanon was confirmed Saturday in a 45-year-old Lebanese woman who had traveled from Qom in Iran.

"the attacker, who also claimed to be a member of a political party that was not disclosed"
LOL
We all guessed, no need to disclose it...

This biased government is playing with people's lives by not banning all flights to / from Iran. The assault on the journalist must be punished severely. What happened to free speech and the right to free expression ?

you're a pervert but it's ok since your master the old general in the high castle is your master!

You're a pervert but it's ok since your master, the old general in the high castle, is your ethics overseer! (sorry for the repetitions)

"the attacker, who also claimed to be a member of a political party that was not disclosed"

God (which one am not sure) in His wisdom has chosen a party that we cannot name to send his most fearfull knight of the Apocalypse, the plague, to put an end to the corruption of our leaders!

Maybe if the children of that guy started dying from the virus he might have a change of heart and switch sides from protecting these thugs, to fighting against them.