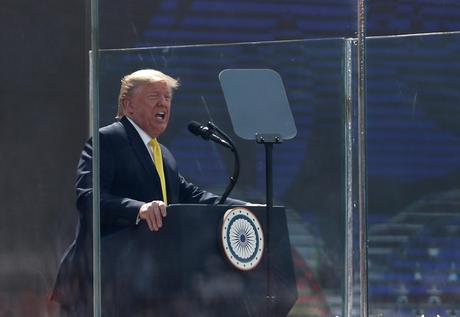 U.S. President Donald Trump gave a special mention to cricket greats Sachin Tendulkar and Virat Kohli as he began a visit to India on Monday -- but it was probably the first time he had spoken their names.

In a speech at the Sardar Patel Stadium in Ahmedabad -- the world's largest cricket stadium -- Trump pronounced the first name of India's greatest ever player Tendulkar as "Soo-chin" and Kohli's first name came out as "Fir-at".

Trump said the stadium was "where your people cheer on some of the world's greatest cricket players from Sachin Tendulkar to Virat Kohli," bringing a smile to the lips of Indian Prime Minister Narendra Modi and applause from the crowd.

The U.S. president also tripped over other words, including Ahmedabad ("Ahba-bard") and tea-seller chaiwalla ("cheewalla"), and he himself chuckled at his attempt to pronounce the name of Hindu monk Swami Vivekananda ("Swami Vivekamandan").