Aoun Says Oil Drilling to Have Positive Impact on Economy 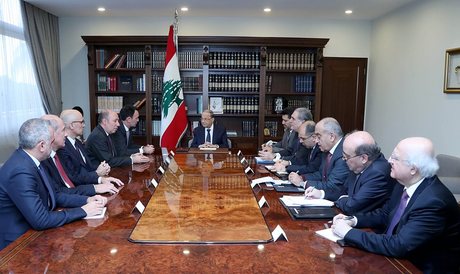 President Michel Aoun announced Wednesday that the launch of offshore oil drilling in Lebanon will “positively affect the national economy and limit the negative repercussions it is facing.”

A drillship had anchored off Lebanon Tuesday to explore for oil and gas, raising hopes for a future boost to the country's crumbling economy. Information Minister Manal Abdul Samad said the first ever such exploration would start within 48 hours.

Aoun thanked the Total delegation for “contributing to realizing the dream of the Lebanese in the extraction of oil and gas from their land and waters.”

Lebanon is one of the most indebted countries in the world, with a burden equivalent to 150 percent of its GDP.

It is also in the grips of a severe liquidity crunch that has hampered imports, sparked price hikes and caused the value of the Lebanon pound to plummet on the parallel exchange market.

Sorry Aoun--it will take 3 to 5 years to realize any tangible benefits. I know he is trying to sound optimistic, but there is still a long way to go.

He will dead by then

we can only hope---he, barry and the wild haired one from moukhatra being gone would be a victory for this country.

Sorry Aoun--it will take 3 to 5 years to realize any tangible benefits. I know he is trying to sound optimistic, but there is still a long way to go.

What he meant to say Oil drilling will have a positive impact on him and his 40 thieves...

funny guy... by the time they will start to make money lebanon will be bankrupt... but maybe it's what they want

Dudes.. you're not gonna believe this but.. I just discovered a deposit of fossil fuel... Yes!.. It is located at the head of what looks like a large rectangular table!.. Umm... No wait.. wait.. crap!.. That was only a fossil that I found... Sorry if I got you all exited.. my bad!..

Nigeria also has one of the largest oil field but how much do the nigerian people receive from it? nothing.. it all goes to the multinational corp. and the corrupted state...
how will it be different in lebanon? what guarantees does the gvt give to the lebanese people that they will benefit from the oil?

A corrupt dictator under the guise of a terror group mismanagin a littl banana republic....