Beirut's Parking Meters: Where Does the Money Go? 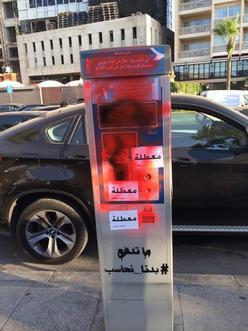 Every year the Lebanese capital's parking meters generate the equivalent of six million dollars, but the municipality on whose soil most operate says it has yet to see a penny.

The case is just one to have sparked public anger in a country rocked since October 17 by unprecedented anti-government protests.

A source with the borough claims that, under a 2004 deal with the Traffic Authority, a share of the coins slipped into Beirut's parking meters are supposed to land in the municipality's coffers.

But "until now, the municipality has not received anything," the source told AFP.

During the mass protests of recent months, the municipality filed a complaint with the Council of State and obtained permission to choose an auditor to investigate the case.

The municipality has also requested to be put back in charge of the parking metres on its turf.

Lebanese-American consortium Duncan-Nead, operates some 900 meters in Greater Beirut under a contract with the Traffic Authority.

An employee at the company, who requested to remain anonymous, said they generate an annual income of 10 billion Lebanese pounds, or a little more than six million dollars.

They were set up under a wider transport plan for Greater Beirut, with funds from donors including the World Bank.

Some have asked why the municipality is only now complaining, more than a decade into the project under which the Traffic Authority was supposed to pay a concession fee to the municipalities.

But the source at the borough blamed previous municipality officials who did not look into the matter, as well as grinding bureaucracy.

Until 2012, he said, the municipality didn't even have a copy of the contract with the Traffic Authority and seemed to know little about the deal.

The Traffic Authority in November said money it collected from parking meters was used to maintain the meters themselves as well as traffic lights, surveillance cameras and electric road signs.

Lebanese firm Nead is also in charge of the upkeep of that equipment.

But the Nead employee insists they won the contract fair and square with a better tender than the competition.

"Why would our prices be 30 percent cheaper if there had been a political intervention?" the employee asked.

Lebanese broadcaster Al-Jadeed accused shareholders at Duncan-Mead of having ties to political heavyweights in Lebanon.

The company employee inisted they were merely "a group of investors who want to place their money to make a profit".

He said the Traffic Authority is using the parking meter income to finance its projects, including new parking meters that have benefited Beirut municipality.

To support his claim, he produced a request from the Beirut municipality in 2015 for more parking meters, which he said the Traffic Authority financed.

"With what money? The parking meter money," he said.

Why am I not surprised.

This country should be burned to the ground.