Diab Says State ‘Weak,’ But ‘Decisive’ Decisions Will Be Taken 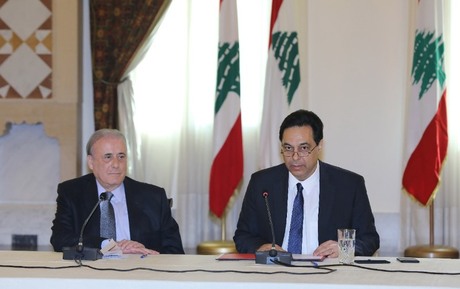 Prime Minister Hassan Diab said on Monday that Lebanon is passing through a very difficult phase and that the government is going to take “decisive” decisions to overcome the crisis.

“The State is weak and the country is passing through a very difficult stage. The Lebanese fear for their present and for their future. Their fear grows over their financial, economic, social and living situation in addition to health concerns (over coronavirus),” said Diab during a meeting with members of the consular corps.

“The State is no longer able to protect the Lebanese,” he added. “We are facing immense difficulties, and the State’s mechanisms are constrained with sectarianism and the government’s burden is really heavy and complicated," he added.

But he stressed "we are determined to unravel the difficulties and move to the notion of a genuine State and address the crises.”

So how can a weak state make decisive decisions? Can someone explain that oxy-moron to me please???

Quite literally and frankly, and call me old school if you will, but a decision isn't ever truly what you would in the classical sense call decisive until and unless it is decisive.