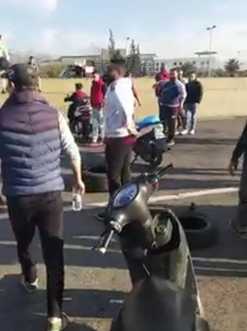 Anti-government protesters blocked roads across Lebanon on Wednesday to denounce the financial and economic deterioration.

The demonstrators blocked the Saifi and Sport City roads in Beirut, the Taalabaya and Jdita roads in the Bekaa and the el-Mina, Minieh, al-Mhammara and al-Beddawi roads in the North.

The Jiye highway that links Beirut to the South was later blocked with burning tires as the Saifi road was reopened.

In Tripoli, two protesters were injured as army troops reopened the road by force at the Pistachio roundabout. Young men on motorcycles meanwhile roamed the city’s streets before blocking the el-Mina highway in protest at “the deteriorating economic situation, the rise in the dollar exchange rate and officials’ failure to take sufficient measures to prevent the spread of the coronavirus,” the National News Agency said.

Protesters on the el-Mina highway also chanted slogans demanding the recovery of the state’s stolen funds.

In the southern city of Sidon, demonstrators forced money exchange shops to close in protest at “their exchanging of the dollar at the black market rate contrary to the official rate declared by Lebanon’s central bank.”

Money changers were on Wednesday selling the dollar for more than LBP 2,550 and buying it for around 2,540.

The money exchange shops have blamed the record rate on “the unstable and ambiguous situations in relation with the March 9 Eurobond juncture and the fears over the coronavirus repercussions, especially as to the shrinking of the global economy.”

This country is collapsing really fast and we’re all depressed.

The Central Bank no longer intervenes to stabilize the local currency by pumping dollars into the market. So, it is supply and demand. You cannot blame the exchange market for the rise in the dollar rate when the country is bankrupt.

We are dealing with a government of 'experts' who do nothing but make committees and we have MP's (who selected them) giving statements of policies they want.

So, what we are left with is s do nothing government selected by the good for nothing policial classes of Amal, Kizb and FPM. They must be so proud.