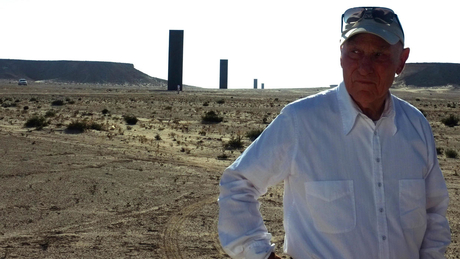 But the 15-metre-high (50-foot) rust-coloured works have been blighted in recent months by visitors intent on leaving their mark and carving names and slogans into the work, authorities said Thursday.

"Vandalism of any kind to our public art, not only affects the community's enjoyment of the piece but also harms Qatar's cultural heritage," said Abdullatif al-Jasmi, cultural heritage protection director at Qatar Museums, which is responsible for the work.

The installation is located in the Brouq desert reserve in the Gulf country's far northwest, a secluded area only accessible by 4X4s and renowned for sweeping landscapes, sand dunes and vivid sunsets.

It will now undergo a "specialised cleaning process" after "significant and deliberate damage caused by visitors to the sculpture in recent months", Qatar Museums said in a statement.

"It is important that people understand the social impact of the damage to the artworks but also that they can receive substantial fines and may be responsible for restoration," added Jasmi.

Energy-rich Qatar has gained a foothold on the global cultural scene by lavishing billions of dollars on renowned artworks in recent years.

Damien Hirst's "Miraculous Journey" -- a group of 14 bronze foetus sculptures -- caused a stir when it was installed in front of a medical centre on the outskirts of the capital.

"Being able to build the piece in the desert at this scale is like meeting the Medicis in the 15th century," Serra said following the work's inauguration in 2014, referring to the Florentine family's patronage of Renaissance artists.

"Those kinds of opportunities are rarely given to an individual. In my country, art comes after football and entertainment."