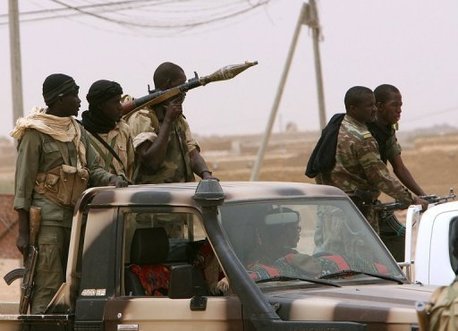 Malian troops and Tuareg fighters clashed Wednesday in Aguelhok in northeastern Mali, a day after rebels attempted to seize another nearby town, witnesses said.

"Since 5:00 am (05:00 GMT) this morning an exchange of fire between a group of Tuareg rebels and the Malian army has been heard in Aguelhok. Heavy weapons fire has been heard near the military camp," a prominent resident in the town said.

On Tuesday fighting lasted several hours as rebels battled to seize control of Menaka, south of Aguelhok, which is not far from the Niger border.

Army helicopters bombed rebel positions, forcing them to withdraw to a forested area near the town.

"On the assailants' side, six vehicles were destroyed, several people died or were wounded, several assailants were taken prisoner; on the Malian side there is one dead," a government statement said.

It added that the assailants "included forces that returned from Libya and comprised elements known as the Azawad National Liberation Movement (MNLA)."

Hundreds of armed Malian Tuareg recently returned from Libya where they fought alongside troops of ousted leader Moammar Gadhafi.

Their return to the region has raised fears over greater instability in the troubled desert region already plagued by al-Qaida in the Islamic Maghreb (AQIM).