Will Coronavirus Slow the World's Conflicts -- or Intensify Them? 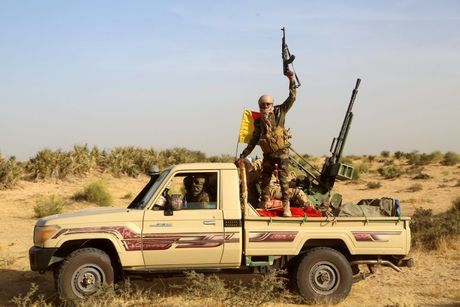 Syria, Libya, Yemen, Afghanistan, the Sahel... with the great powers focused intently on the COVID-19 virus, will armed conflicts across the world decrease in severity or intensify? Experts as well as diplomats at the United Nations say there is a serious risk of the latter.

For guerrilla fighters and extremist groups, "it's a clear godsend," said Bertrand Badie, a specialist in international relations at France's Institute of Political Studies (Sciences Po).

When the "powerful become powerless," he told AFP, one can see "the revenge of the weak over the strong."

In recent days, some 30 Malian soldiers were killed in an attack in northern Mali blamed on jihadists, without drawing any sharp reaction from the Security Council.

In Libya, and Syria's Idlib region -- the object of intense diplomatic attention before the coronavirus stole the spotlight -- fighting continues.

Evoking the "potentially devastating impact of #Covid-19 in #Idlib and elsewhere in Syria," the U.N. undersecretary-general for political affairs, Rosemary DiCarlo, called on Twitter for all parties to show restraint.

"If anyone -- incredibly -- still needed a reason to stop the fighting there," she added, "this is it."

Martin Griffiths, the U.N. special envoy for Yemen, issued a similar plea: "At a time when the world is struggling to fight a pandemic, the focus of the parties must shift away from fighting one another to ensuring that the population will not face even graver risks."

Up to now, these countries have not been afflicted by Covid-19 on the scale seen in China, South Korea or Europe. But the virus carries the potential, once it reaches into poor and conflict-ridden countries, of having a devastating impact.

In the absence of concerted assistance from abroad, the UN fears "millions" could die.

The pandemic will not necessarily favor any particular group of belligerents, one diplomat noted, because the ravaging disease has been "uncontrollable."

"The pandemic could lead to a worsening of conflicts, with the risk of exacerbating the humanitarian situation and population movements," he said.

But the pandemic might also sap the will of the belligerents and their ability to fight in coming months, some experts said.

"Throwing their troops into battle will expose both states and violent non-state groups to contamination, and thus to potentially catastrophic losses of human life," said Robert Malley, president of the Washington-based International Crisis Group.

He believes that the virus "will very certainly diminish the capacity and will of states and of the international system -- the UN, regional organizations, refugees, peace-keeping forces -- to dedicate themselves to the resolution or prevention of conflicts."

It will also throw up a whole set of new obstacles, he told AFP, complicating access to conflict zones, making it harder to organize negotiations in neutral countries, and diverting financial investments to the fight against the coronavirus.

"What government would want to invest in the pursuit of peace in Yemen, Syria, Afghanistan, the Sahel or elsewhere when it is facing an economic, social and political crisis almost without precedent?" he asked.

With the news media obsessively focused on Covid-19, Malley said, "these conflicts, however brutal and violent they may be, will for many people become unseen and unheard."

At the UN, which has been struggling to respond as best it can, diplomats insist that their efforts to monitor regional crises and conflicts will continue, even if the international organization has sharply curbed its schedule of meetings.

"We intend to ensure that #UNSC plays its vital role in maintaining global peace and security," Britain's interim ambassador to the UN, Jonathan Allen, wrote on Twitter. "Covid-19 is the major global focus, but we have not forgotten about Syria, Libya, Yemen."

But Richard Gowan, a New York-based specialist in UN matters, expressed some doubt.

"Security Council diplomats say that it is hard to get their capitals to focus on UN issues," he said.

Among non-governmental organizations (NGOs) dealing with human rights issues, like Human Rights Watch, concern is growing that whole areas of action are falling by the wayside.

One example: diplomats say the much-awaited and repeatedly delayed publication of a U.N. summary report on the bombing of hospitals in Syria -- originally due at the beginning of the year -- is now not expected before April, at the earliest.