Berri Says State of Emergency Must Be 'Instantly' Declared 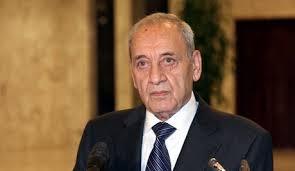 Speaker Nabih Berri said he deliberated with Prime Minister Hassan Diab the need to declare a state of emergency over coronavirus fears which has become a necessity in light of an increase in the number of people infected with the virus, al-Joumhouria daily reported on Tuesday.

Berri said that Diab had vowed, during their talks on Saturday, he would declare a state of emergency, “but I do not know why this decision has not been taken yet,” said Berri.

“The situation is unbearable, a state of emergency must be immediately and urgently declared,” he emphasized, likening the “general mobilization” state announced last week by the government to a “light emergency.”

“Measures must be strict to the utmost extent in obliging citizens to adhere to orders similar to what is applied in the countries of the world, at least a curfew must be imposed,” said Berri.

“The government’s responsibility is to strive to secure the people's need for food, medicine and unconditional aid, especially for the poorest,” he concluded.

This is telling me that the true numbers of those affected with the corona virus are substantially higher and probably in the shia communities. Of course, the official numbers don't reflect this, but what else do you expect from their secretive partners?

There are many cases in your sunni areas of Akkar and Tripoli too. So don't say it is just for Shia. It is all of Lebanon even Achrafieh

That's true, but each time the figure is changed, it almost always mentioned that NONE of them were from Iran. Why are they going out of their way to say that? Also, take a look at the numbers. Iraq has a couple of hundred, Syria has ONE (lol), and we have only 300. I can;t see any way that these figures are close to accurate because there is an aspect which someo parties don't want to publicize.