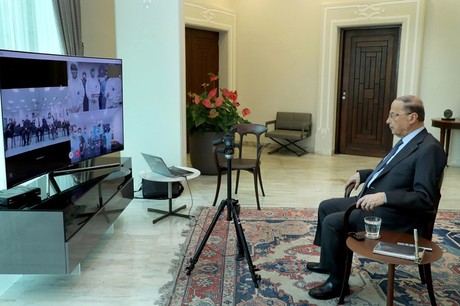 President Michel Aoun on Tuesday followed up on the work of the crews of the state-run Rafik Hariri University Hospital and the Lebanese Red Cross in the face of the coronavirus crisis and heard their concerns and demands, the National News Agency said.

The talks between Aoun and the two sides occurred through separate video calls via the Skype application, NNA said.

The president assessed their situations and readiness against the coronavirus pandemic and hailed “the efforts that the medical body in Lebanon and the Red Cross volunteers are carry out in order to triumph over the pandemic and safeguard the safety and health of the Lebanese,” the agency added.

“Today, you are the source of reassurance for the Lebanese. Your efforts are sacred because you give unconditionally and risk your lives. Today only a few people are subjecting themselves to danger like you are doing,” Aoun told the crews.

Lebanon has so far confirmed 304 coronavirus cases among them four deaths and eight recoveries.

It has declared a so-called state of general mobilization in bid to limit the spread of the virus.

What a horrible TV stand and table. This massive oled tv cost the Lebanese taxpayers 80 000 dollars.

Not enough. An all-night curfew should be declared & implemented, as soon as possible.

They brought in a photographer just for this?
Cheap propaganda.