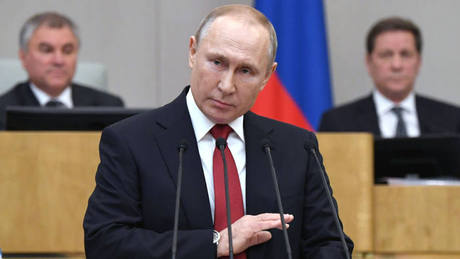 Russian President Vladimir Putin was set to address the nation on Wednesday in a rare televised broadcast as authorities scrambled to contain the coronavirus outbreak.

The Kremlin announced the address as Russia recorded its biggest spike in confirmed infections so far, with 163 new cases for a total of 658 across the country.

Russia has yet to impose the kind of restrictions seen in other countries over the virus but concern has been growing as the number of cases steadily grows.

Putin met with top officials on Tuesday and put on a yellow hazmat suit as he visited a major hospital treating coronavirus patients.

Kremlin spokesman Dmitry Peskov told reporters that after Tuesday's meetings Putin had decided he needed to address the nation.

Putin said last week that the situation with the coronavirus was "under control" after Russia imposed 14-day quarantines on people arriving from abroad.

The government has also closed schools, recommended that some people work from home and told elderly residents in Moscow, where most of the cases are concentrated, to self-isolate.

It halted cultural and sports events and closed fitness clubs, cinemas and night clubs, though restaurants and cafes were allowed to remain open.

Authorities have repeatedly denied plans to impose lockdowns like those seen in China, Italy, Spain, France or Britain, but the warnings from officials on Tuesday were stark.

"The problem is that the volume of testing is very low and no one has a clear picture" of the situation in Russia and the world, Sobyanin told Putin.

Denis Protsenko, head doctor of Moscow's new hospital treating coronavirus patients, told Putin that Russia needed to be ready for an "Italian" scenario, referring to what is now the hardest-hit country in the world in terms of deaths.

"If there is a big spike, and Moscow is headed there, our hospital is ready to transform," he said.

Russian lawmakers have proposed imposing severe punishments -- including up to seven years in prison -- for people breaking coronavirus quarantine rules.

Apart from traditional New Year's greetings, Putin rarely addresses the public on television. The last time was over an unpopular pension reform in August 2018.

Among the measures he could announce is a delay to a national vote on constitutional reforms scheduled for April 22.

The reforms, proposed by the president and approved by lawmakers over the last few months, would reset presidential term limits and potentially allow Putin, in power for 20 years, to stay in office until 2036.

He could also postpone plans for a massive military parade on May 9 to mark 75 years since the Soviet victory over Nazi Germany. Dozens of foreign leaders had been invited to take part.

Peskov said on Wednesday the postponement of the celebration had been discussed but no decision was yet made.

The defence ministry said it was checking the readiness of military units to fight the epidemic following an order from Putin.

The coronavirus and steep drop in oil prices have caused a two-pronged crisis for the Russian economy, with the ruble falling to its lowest levels since early 2016. This presents a huge challenge to Putin's promises to boost economic growth and raise living standards.